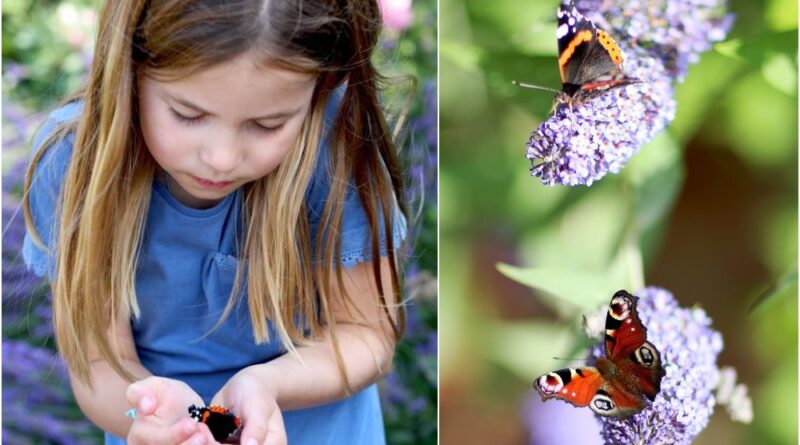 During the weekend, the Duke and Duchess of Cambridge shared a brand new photo of their six-year-old daughter, Princess Charlotte. The sweet photograph shows the young royal holding a Red Admiral butterfly near their home in Norfolk.

The photograph, like most of the pictures posted by the Cambridge family, was taken by Kate, with the photograph being accompanied with a caption urging everyone to join the Big Butterfly Count-a national conservation survey to track the population numbers of the insects.

“Save Butterflies are encouraging us all to count these incredible creatures because not only are they beautiful creatures to be around but they are also extremely important. Butterflies are vital parts of the ecosystem as both pollinators and components of the food chain,” the Cambridges wrote on Instagram.

The Cambridges doing their part to protect butterflies made me think about this beautiful picture of the Duke of Edinburgh 🦋 I'm sure he is so proud of them for that and so many other reasons wherever he is now 🥺🥺 ah and look how gentle Princess Charlotte is ❤️❤️❤️❤️ pic.twitter.com/lMaE3EBxVb

This is only one part of the conservation effort Prince William and Kate are undertaking, and if the photographs are to judge, seeing how gently Charlotte is cradling the butterfly, the young royal might also share her parents’ love of animals.

This somewhat runs in the family, as her grandfather, Prince Charles, has done great things for the planet and for conservation efforts. But it goes even further than that. Royal fans noticed a similarity between this new image of Charlotte and a photograph of her great-grandfather, the late Prince Philip.

“The Cambridges doing their part to protect butterflies made me think about this beautiful picture of the Duke of Edinburgh. I’m sure he is so proud of them for that,” one account wrote on Twitter, posting a side-by-side of Charlotte with the Red Admiral, and Philip as a younger man, surrounded by butterflies.

The photograph of the late royals seems to have some importance for him and the family, as it was shared by the royals on social media in April shortly after his death as a way to pay tribute to his passion for conservation.

The post wrote: “In 1988, as President of @WWF, The Duke of Edinburgh supported efforts by a conservation group in Mexico to protect the Monarch Butterfly as deforestation & commercial logging posed a serious threat to the species’ survival.”

The charity Save Butterflies, which Prince William, Kate and Princess Charlotte have been supporting recently, also shared the photo of Prince Philip with the insects after his death, writing: “We are sorry to learn of the death of His Royal Highness, the Duke of Edinburgh. May he rest in peace.”

Back in 1961, the Duke of Edinburgh became president of the British National Appeal, the first national organization in the World Wildlife Fund family. And since then, the Prince worked closely with the WWF, highlighting the importance of conversation around topics such as conservation, as well as campaigning for animals and their habitats to be respected.

It is wonderful that Prince Philip’s love for butterflies and their conservation will carry on, with the younger generations taking up and carrying on his work.

READ NEXT: Two Of Duchess Kate’s Photos To Be Included In Moving Museum Exhibition