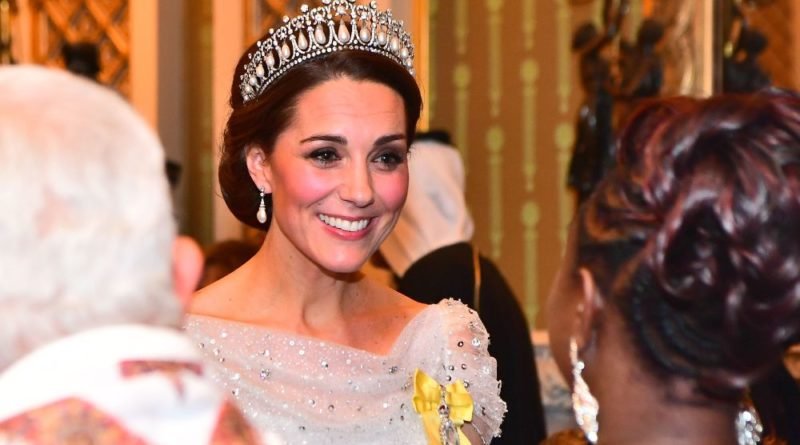 The Duchess of Cambridge has only been seen in a tiara a handful of times, and on soon, she’ll wear a sparkly topper once again.

Every year in December, the Queen is hosting an evening reception for members of the Diplomatic Corps at Buckingham Palace in London. The glitzy annual event is attended by numerous members of the royal family, including Prince William and Kate.

Royal fans will know that state dinners are one of the few occasions when royalty are permitted to wear tiaras.

The invitation was shared by an attendee on Instagram. It reveals that the reception is due to take place this year on Wednesday 11 December. The “white tie and decorations” dress code means tailcoats for the gentlemen and full-length gowns for the ladies. Tiaras, medals and Royal Orders are also displayed.

Prince William and Kate, who attended her first state banquet alongside the Queen in 2015 when Chinese President Xi Jinping came to London, are becoming regulars at such events as William is second in line to the throne.

At last year’s event, Kate wowed in an embellished off-white gown with a flattering cowl neck and capped sleeves by Jenny Packham. She opted for one of her favorite tiaras, the Lover’s Knot tiara that once belonged to Princess Diana.

She also displayed her Royal Family Order, an honor given by the Queen at her discretion to members of the royal family as a reward for their service.

READ NEXT: Kate Just Hosted Her First Christmas Party Of The Year