And uncle Harry and auntie Meghan have taken to Instagram to congratulate the birthday boy with a sweet message.

From their SussexRoyal account, Harry and Meghan commented: “Happy Birthday ?? Wishing you a very special day and lots of love!”

The Duke and Duchess of Sussex continued their tradition of commenting. They also congratulated Louis and Charlotte on their birthdays back in April and May.

And Louis’s birthday message said: “Happy Birthday Louis! Sending lots of love from both of us ?? xo.”

“The Duke and Duchess of Cambridge are very pleased to share new photographs of Prince George to mark His Royal Highness’s sixth birthday,” they said in a post on their official Instagram Sunday.

Each of the photos was taken by mum Kate. Two of them were captured at their family home in Kensington Palace.

The third one was taken during a recent family holiday and it shows George posing outside in the sunshine in a green polo shirt and shorts.

The young Prince is enjoying his birthday on holiday with his family in Mustique.

The Cambridges traveled for a family holiday last year to Mustique during his birthday on July 22. It was reported that they have joined Kate’s parents Carole and Michael Middleton on the Middletons’ annual break.

Mustique is a favourite for the Cambridges due to the relative privacy it offers. Every island visitor is registered with our security team before arriving on island by land, air or sea, whether staff, local islander or guest to ensure the security team know who is on island at any one time,” the island’s website states. 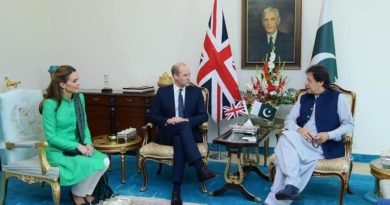 Why William And Kate’s Trip To Northern Ireland Was Kept Secret?