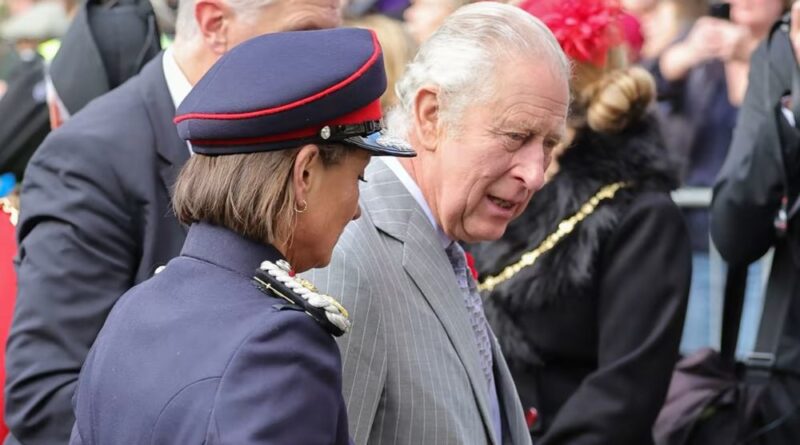 On Wednesday King Charles and Queen Consort Camilla visited York, and during that visit a protestor threw up to five eggs at them, with all of them missing the royal couple before they were ushered away.

A new video, taken by a member of the public, has surfaced of the whole situation which shows the monarch’s initial reaction when he realized what was happening, as well as the first words he spoke.

In the clip you can see King Charles realizing that there was something strange happening as soon as he heard the first egg crack next to his right foot.

The royal quickly glanced at the cracked egg before continuing to shake hands with city leaders, among them the Lord Mayor, who had welcomed the couple to the new city.

The monarch’s entourage quickly took action and ushered him away, with the royal being heard talking to His Majesty’s Lord-Lieutenant for North Yorkshire, Jo Ropner, who accompanied the royal throughout the engagement, telling her: “Let’s get out of the way,” before asking “Where do we go next?”

Then he turned to another member of his team and asked: “Is he [the protester] here?” before being assured that it was fine and he need not worry.

His Majesty was left looking quite confused as the whole ordeal unfolded, however it seems to have been cleared up immediately, with the lone protestor being arrested shortly after.

The same day, the North Yorkshire Police revealed that the man, a 23-year-old student at the University of York, had been bailed. The police said that the man, whose identity remained unknown, had been interviewed following the incident.

Besides the egg incident, the traditional ceremony that sees the monarch be officially welcomed to the city of York by the Lord Mayor continued without problem. This had last happened in 2012, when it was carried out by his late mother Queen Elizabeth.

The King seemed quite cheery and in high spirits as he continued with his walkabout, greeting and waving at the gathered crowds. The royal couple later attended the unveiling of a statue of Queen Elizabeth II, the first to be installed since her death.

Speaking at the ceremony, Charles said: “The late Queen was always vigilant for the welfare of her people during her life.

“Now her image will watch over what will become Queen Elizabeth Square for centuries to come.”

The sculpture is around 2 meters tall and weighs 1.1 tonnes, as it is made from lepine limestone from France. It was designed to celebrate the late Queen’s platinum jubilee and was finished in August, one month before the monarch’s passing.