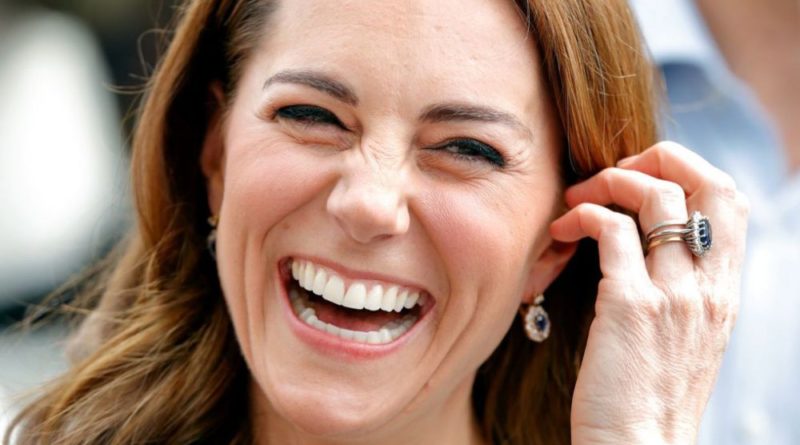 Aside from her iconic engagement ring that is known the world over, royal fans have noticed that Duchess Kate actually wears two more rings on her wedding finger. And they all have a very sweet meaning.

When Prince William proposed to Kate, he gave her the diamond and sapphire engagement ring. The stunning ring was designed by the royal jeweller, Garrad, and was the engagement ring Prince Charles gave to William’s mother, Princess Diana.

The sapphire ring is one of a trio that Kate typically wears day to day. Kate’s second ring is her gold wedding band, which she first wore on her wedding day. The band was made from a special nugget of Welsh Gold, in accordance with royal traditions.

For nearly a century, royal wedding bands have been made from nuggets of rare, pure Welsh gold from a specific mine: the Clogau St. David’s gold mine. According to the company’s website “this tradition was founded by The Queen Mother, then Lady Elizabeth Bowes-Lyon, on her marriage to the Duke of York on 26th April, 1923.”

In addition, the Duchess also wears an eternity ring; specifically the Eclipse diamond eternity ring, made from 18 carat white gold, by Annoushka. It’s thought to be a generous gift from her husband, marking the birth of their first child Prince George.

But, the eternity band apparently is not the only jewel that Prince William has given to Kate to mark the birth of their children.

At Prince Harry and Meghan’s wedding, Kate’s citrine ring caught our attention; which many believed was a ‘push present’ following the arrival of the royal couple’s third child, Prince Louis.

To commemorate the birth of Princess Charlotte, it was reported that William gave Duchess Kate a pair of KiKi McDonough earrings made from amethyst and tourmaline.