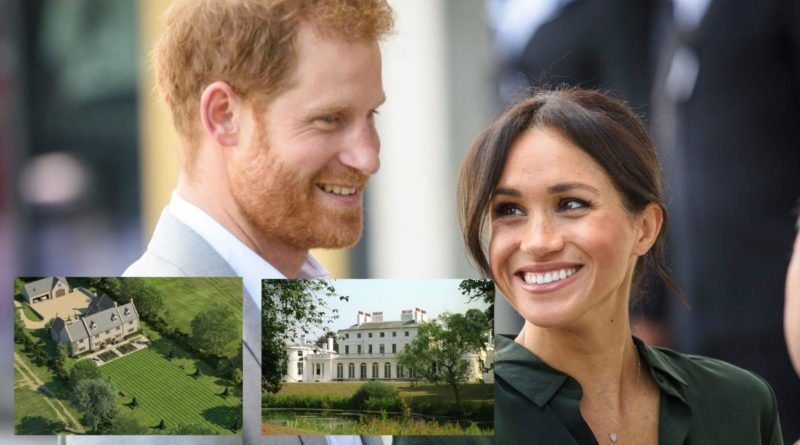 There have been reports that Meghan Markle and her husband Prince Harry are set to give up their  £2.5million country house in the peaceful Cotswolds countryside. The decision comes just before the couple welcomes their first baby in April, just a couple of weeks before their first wedding anniversary.

They are also preparing for their move from the grounds of Kensington Palace in west London to a cottage on the Queen’s tranquil Windsor estate. It was previously thought that despite this the Duke and Duchess of Sussex would keep the former farmhouse in the Cotswolds, but reports have come in that they are cancelling their two-year lease early and moving out in March due to financial concerns or security reasons. Harry and Meghan took on the lease just before their wedding in May last year and spent most weekends there, as they wanted to escape the  ‘goldfish bowl’ of royal life at Kensington Palace, where Prince William and Kate Middleton reside, with their three children, Prince George, Princess Charlotte and Prince Louis.

The Duke and Duchess of Sussex will be trading the busy life at Kensington Palace for a more peaceful one at Frogmore Cottage, which is currently undergoing reconstructions and work is being done on the place, that is expected to cost the Royals a measly £3million. And by the Royals, we mean the taxpayer, as they will cover most of the costs, with Harry and Meghan just chipping in for the fixtures and fittings themselves. Wow, we hope that isn’t much for our favourite royal couple.

A source has suggested to the Daily Mail that the Duke and Duchess decision to cancel their Cotswolds lease because they were struggling to pay for the upkeep of two properties. Meanwhile, another source claims that the reason behind their decision is due to security reasons.

The Cotswolds estate where the £2.5m property is located is owned by multi-millionaire Old Etonian Nicholas Johnston and lies eighty miles north-east of Chipping Norton.

Frogmore Cottage, hidden away on the grounds of Frogmore House, was gifted to Prince Harry and Meghan Markle by the Queen last year, with the move there being confirmed by Kensington Palace in November, saying Windsor is a “very special place” for the couple. The cottage is half a mile south of Windsor Castle, the Queen’s summer residence, and St George’s Chapel, where last year in May, Harry and Meghan tied the knot as millions around the world watched on TV. Insider sources have said that Meghan has often been corresponding with the renovation team. They added the home was being “specially designed” to ensure that the family has a “comfortable country life”.

A source said: “It is a very expensive affair.”

“Frogmore Cottage is in an extremely run down condition and is needing a lot of TLC and heavy restoration to bring it up to standard ahead of the Duke and Duchess’ moving in date.”

A spokesman for the Duke and Duchess of Sussex declined to comment on the claims.

READ NEXT: Will, Kate, Meghan And Harry Just Had A Royal First! And We Almost Didn’t Nottice!