King Edward III established the Order almost 700 years ago. He was inspired by King Arthur’s Knights of the Round Table.

Among the attendees was The Duchess of Cambridge who was spotted chatting with Sophie, the Countess of Wessex, Queen Letizia of Spain, the Duchess of Cornwall and Queen Maxima of the Netherlands. Prince William, Prince Charless and the Earl of Wessex were also there.

At this year’s ceremony King Willem-Alexander of the Netherlands and King Felipe VI of Spain were invested by the queen with both being made Stranger Knights of the Garter.

However, the Duke and Duchess of Sussex were missing from this morning’s procession.

Following the birth of their first son Archie, Meghan is currently on maternity leave. But, even if she wasn’t, she still almost certainly wouldn’t have been in attendance.

And the reason is because neither Meghan or Harry are a Knight of the Order of the Garter.

Marlene Koenig, a royal expert, explained to Harper’s Bazaar: “The Duke of Sussex is not a Knight of the Garter and will probably not be invested until his father is King.”

“The Duchess of Sussex has never attended and will probably not attend until Harry is named,” she added.

The royals usually aren’t appointed to the Order until they are in their 40s. Princess Anne was received the honor in 1994. Prince Andrew and Prince Edward were invested in 2006. Prince William was appointed as the 1,000th Knight in 2008. He was just 25 years old but it is likely because of his future role as king.

Although Harry didn’t attend the Garter Day processional, he still had quite a busy day.

Harry is taking up the fight against landmines just like his mother Diana did before him.

Earlier today, he spoke at a major meeting on landmines at Chatham House in London on Monday, saying that his experience has “showed me the importance of landmine clearance within a humanitarian emergency because, let’s not forget, land mines are a humanitarian issue — not a political one.”

Echoing his mother, Harry said: “Let’s not forget, land mines are a humanitarian issue not a political one.” 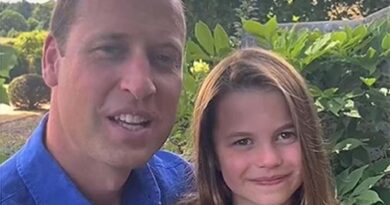