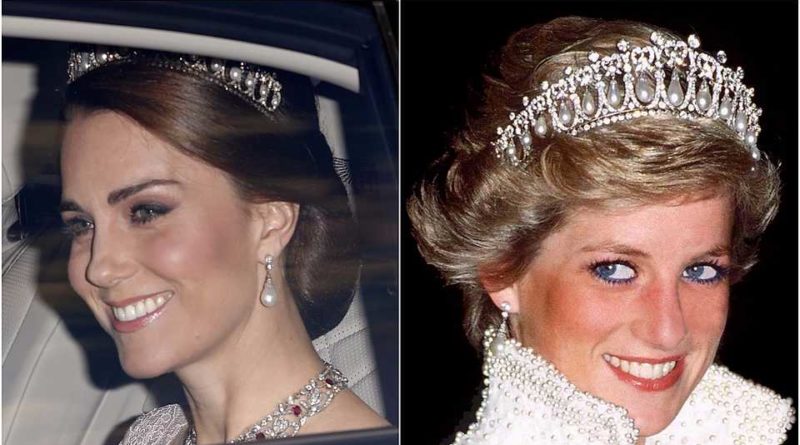 This Tuesday Kate Middleton is set to attend her very first state banquet as the Princess of Wales – welcoming the President of South Africa.

Royal ladies are permitted to wear tiaras on special occasions, including state visits, as such royal fans are eager to see which headpiece will appear on the Princess’ head.

One we know certainly won’t be appearing is the Spencer tiara, which belonged to Kate’s late mother-in-law Princess Diana – Diana having worn it on her wedding day.

Designed in a garland style and features a central heart flanked by continuous running scrolls, spaced with star and trumpet-shaped flowers, the tiara is set with circular and rose-cut, cushion and pear-shaped diamonds, mounted in gold.

Following Princess Diana’s unfortunate death in 1997, the tiara was returned to the Spencer family, remaining in their care to this day.

Princess Kate has only worn three tiaras to date – in total (state banquet, her wedding…)!

The first time she was seen wearing a royal headpiece, was the day she became a royal – on her wedding day to Prince William in 2011, as tiaras are often a symbol of marriage. For the event, she wore a Cartier Halo design, which was a lovely complement to her Alexander McQueen wedding dress.

The Princess of Wales has also been spotted wearing the dazzling Lotus Flower Tiara, a favorite of Princess Margaret’s, which is set with pearls and diamonds.

Kate has also paid tribute to Princess Diana – not through the Spencer – but through the Lover’s Knot tiara, having worn the headpiece on separate occasions.

READ NEXT: Princess Of Wales Set To Receive A New Role