Prince William and Kate’s eldest child, Prince George turned six on July 22. And while they had a family celebration on the actual day on their holiday in Mustique, they also threw the birthday boy a party before they jetted off for the Caribbean.

According to Hello!, William and Kate invited all of his Thomas’s Battersea classmates over for an “action-packed, after school” football-themed bash ahead of George’s actual birthday on July 22.

The entire birthday party was all about football. So, it is possible that that’s where mom Kate took those photos of Prince George in his England Lionesses jersey.

The Cambridges are currently allegedly vacationing on Mustique, an exclusive island that has become a go-to destination for the royal family.

They traveled for a family holiday last year too, to Mustique, during George’s fifth birthday on July 22. It had been reported that they have joined Kate’s parents Carole and Michael Middleton on the Middletons’ annual break.

Due to the relative privacy it offers. Mustique has become a favourite holiday destination of William and Kate’s.

With a no-fly zone enforced over Mustique and the discretion of other guests, the Cambridges can truly relax and let their hair down.

As they do every year, they are taking a break from royal duties in July and August before returning to work in September.

Still, they will carry out a one-off engagement on Friday 9 August when they take part in The King’s Cup regatta. 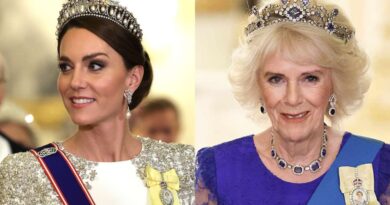