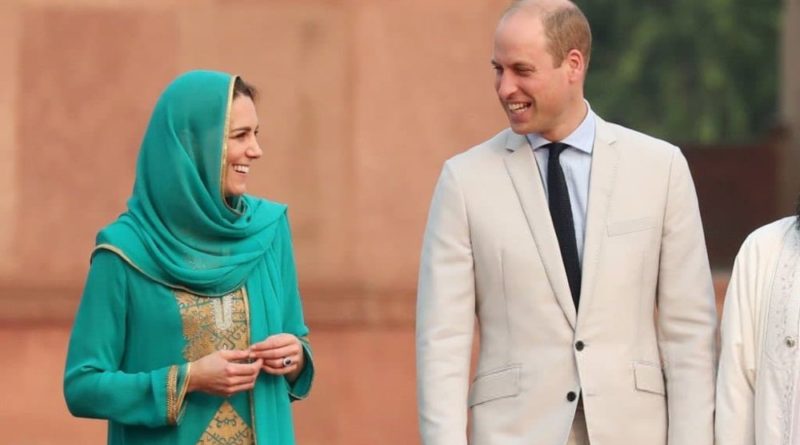 On Wednesday, Prince William and Kate visited one of the world’s biggest mosques, the historic Badshahi Mosque. They are visiting the Holy Site almost 30 years after Diana did so on one of her many visits to the country.

As the Duchess arrived at the Badshahi mosque, she once again appeared to have been inspired by her late mother-in-law Diana when it came to her choice of outfit.

She wore a green shalwar kameez by Maheen Khan and headscarf.

The couple toured the mosque and courtyard, before joining a discussion with faith leaders to understand how they are promoting interfaith harmony within their communities.

For the fourth day of their Pakistan tour, Prince William and Kate arrived in Lahore. The couple travelled on the RAF Voyager to the capital of Punjab. They were greeted at the airport by Punjab Governor Chaudhry Mohammad Sarwar and Punjab Chief Minister Usman Buzdar, before having a formal meeting with them.

The Duchess of Cambridge wowed in a white shalwar kameez, a traditional outfit featuring a long tunic and trousers, by designer Gul Ahmed and a shawl by Maheen Khan. She completed the look with a pair of nude heels, a blush-colored clutch, and minimal jewelry.

Following the meeting, William and Kate stopped at the SOS Children’s Village, which is attached to a school, provides a home and family structure to over 150 young girls and boys, and promotes the development of children into happy, confident and resilient adults.

The couple began by sitting in on a musical storytelling session and were given brightly-colored finger puppets to play along with.

‘It’s very nice to be here,’ said Wiliam, ‘My name is William…. I am called William. How old you you?

After asking each of the children’s ages, he asked one little boy: ‘How old do you think I am? ‘

‘Twenty one,’ offered the child. ‘I’ll take twenty one, that’s good! ‘ he laughed. ‘I am a little bit older than that. Can you guess?

‘I have my own children. A little boy called Louis and then there is Charlotte and them George, who is six. He’s almost as old as you.’

While there, they were also invited to celebrate three of the children’s birthdays and helping them to cut a cake.

“We have been really moved and touched by what we have seen, and by the happy home you have made,” Kate said in her first speech of the tour — which included the Urdu greeting “Assalam O Alaikum. Emaan, Ibrahim aur Daniyal apni salgirah pur bulanay ka bohat shukria” (“Hello. Peace Be Apon you. Thank you for inviting us to your birthday celebration”).

“I’m aware that many of you have experienced extremely difficult times in your lives,” Kate said.

“But it is inspiring to see how you have used your strength and positivity to help transform the lives of so many young children here.”

Following the visit to the Children’s Village, the couple spent time at the National Cricket Academy. There they met some of Pakistan’s cricketing legends. They also joined a cricket match with children from the British Council’s DOSTI programme.

Kate giggled as she tried her hand at batting and it’s not the first time she has shown off her skills. She was seen playing cricket during the royal tour of New Zealand in 2014 and again in 2016, when she visited India.

READ NEXT: The Sweet Way Kate Followed The Queen’s Lead On Pakistan Tour