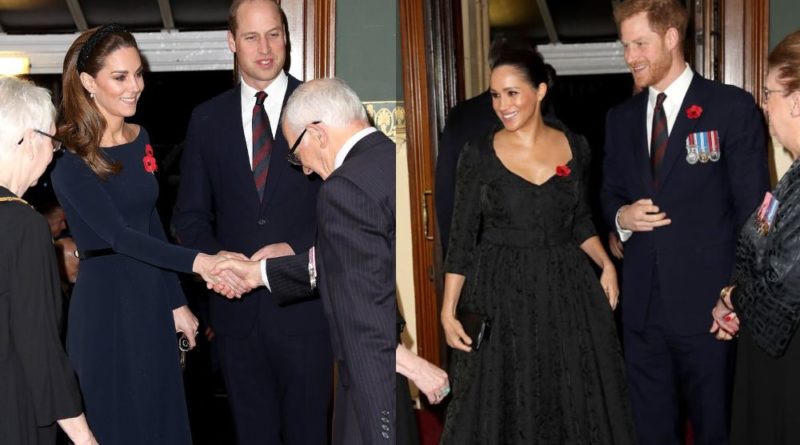 Prince William, Kate, Prince Harry and Meghan have reunited for the Royal British Legion’s annual Festival of Remembrance. It marks their first official joint engagement since Trooping the Colour in June.

The couples have joined the Queen and other members of the Royal Family at the Royal Albert Hall to commemorate those who lost their lives in conflicts.

For the occasion, both Kate and Meghan chose similar looks. They wore black dressed adorned with a red poppy pin; an artificial flower that has been used since 1921 to commemorate military members who have died in war.

Prince William and Kate are regulars at the event, while Prince Harry and Meghan are attending it for the second time.

The service at the Royal Albert Hall is also attended by the Duke of York, the Earl and Countess of Wessex, the Princess Royal; the Duke and Duchess of Gloucester, the Duke of Kent and Vice Admiral Sir Tim Laurence.

In the presence of the royal family, the Royal British Legion is leading the nation in thanking those who served, sacrificed and changed Britain all those years ago.

This year’s event marks 75 years since notable battles of 1944, which included Monte Cassino, Kohima and Imphal, D-Day and the collaboration of Commonwealth and Allied forces.

It also celebrates the 100th anniversary of the Government Communications Headquarters and pay tribute to RFA Mounts Bay which delivered supplies and aid to the Bahamas after Hurricane Dorian this year.

Tonight’s event comes ahead of the Remembrance Day service at the Cenotaph in central London on Sunday; which will also be attended by senior members of the Royal Family.

READ NEXT: William And Kate Changed Their Profile Photo For A Special Reason

Royal Escape: Where Did Prince Harry And Meghan Markle Escape After The Royal Wedding?

The Queen Is Not Longer The Most Popular Royal. There’s A New Winner