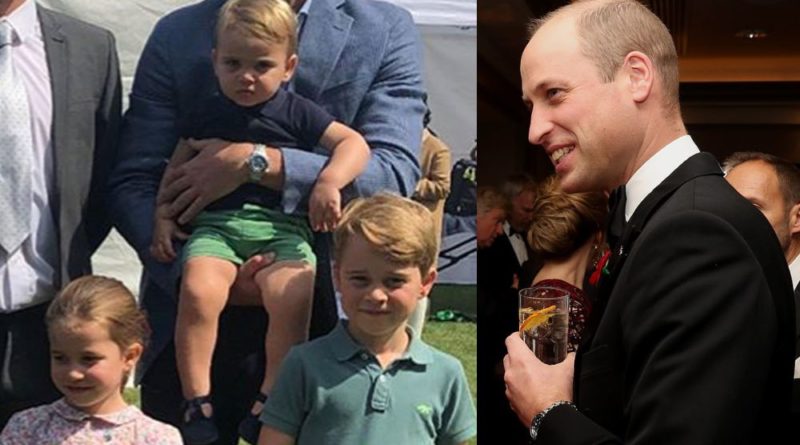 While there, he chatted to British music icon Eric Clapton, who asked him if he fills his free time with any hobbies. William confessed he spends ‘any free time’ with his three children, George, Charlotte and Louis.

He said: “With the children it’s quite hard to get the time off,” before adding: “Any free time I do get I sleep!”

Prince William looked dashing in a black tuxedo and bow-tie as he joined members of the London Air Ambulance at the star studded charity event. He appeared to be in good spirits, as he spoke with members of staff, as well as patients, of the ambulance service.

During the event, the Prince also spoke to a former patient, Yair Shahar, and the pilot who helped save his life, Captain Andy Thomson, when he was seriously injured in a collision with a car while riding his bike in Enfield, London, on April 7, 2016.

The father-of-three has been patron of the London Air Ambulance service since January, with the service marking it’s 30th anniversary this year. He worked for the East Anglian service for 18 months, but left in January 2017.

Jonathan Jenkins, chief executive of London’s Air Ambulance, commended Prince William as “one of our own” and thanked donors at the fundraising dinner.

Addressing the guests in a speech, William said: “When I became Patron for the anniversary in January, one of the targets was to raise at least £1 million to redevelop the crew’s helipad base. I’m very proud that, nine months later, this target has now been met. Once complete, these new facilities at the helipad will allow medics to respond even faster to emergencies and ensure crews have the mental health and wellbeing support that they need.”

Among the guests at the gala were also former Formula One boss Bernie Ecclestone and his wife Fabiana, Tamara, Bernie’s daughter, and her husband, fashion designer Daniella Helayel, art gallery owner Jay Rutland, and Lord and Lady Archer, who hosted a charity auction.

READ NEXT: Kate Made One More Appearance After The Charity Engagement