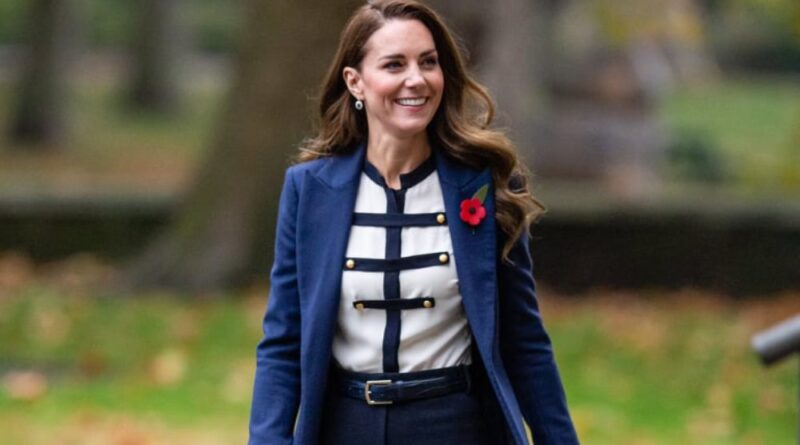 Duchess Kate spent Wednesday afternoon at the Imperial War Museum in London where she went to officially open two new galleries. She opened The Second World War Galleries and The Holocaust Galleries, which tell the individual stories of some of the six million Jewish people murdered in the Holocaust.

While there, the Duchess also viewed a very special exhibition that she contributed to. The exhibition Generations: Portraits Of Holocaust Survivors, includes two photographic portraits she took last year to mark 75 years since the end of the Holocaust.

Kate photographed Steven Frank with his two granddaughters, Maggie and Trixie Fleet, and Yvonne Bernstein and her granddaughter, Chloe Wright, at Kensington Palace ahead of Holocaust Memorial Day in January 2020.

Kate, who is patron of the Royal Photographic Society, said at the time ‘despite unbelievable trauma at the start of their lives’ they were ‘two of the most life-affirming people that I have had the privilege to meet’.

For the occasion, Kate recycled a navy Catherine Walker coat and nautical Alexander McQueen shirt. She was first seen wearing the shirt on a visit to a Birmingham Community Centre in 2011. She topped off her outfit with a poppy Remembrance pin.

“We are honoured to host Her Royal Highness The Duchess of Cambridge at Imperial War Museum today, and to witness her launching our new Second World War and The Holocaust Galleries,” IWM’s Director-General Diane Lees said in a statement.

“Formally opening these Galleries, which are dedicated to improving understanding of two of the most devastating conflicts and genocides in human history, a day before the world stands together to remember those who have fallen in war, is incredibly poignant for us.

Including two images captured by The Duchess. Holocaust survivors, Zigi and Manfred, who The Duchess first met in Stutthof in 2017 and spoke to again to mark holocaust Memorial Day this year, appear in the exhibition as do the stories of the Windermere Children. pic.twitter.com/bD2Gn3AmhK

— The Duke and Duchess of Cambridge (@KensingtonRoyal) November 10, 2021

“Given that this period will sadly soon pass out of living memory, we want these Galleries to preserve the stories of our veterans, our eyewitnesses and our survivors, and ensure that we never forget what they experienced.”