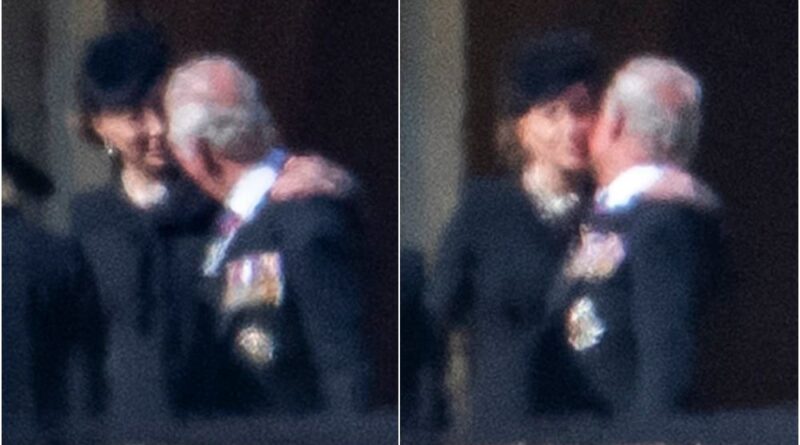 After Prince Philip’s death, the royal family has come together in grieving, with the members present at the ceremony supporting and being there for each other. On Saturday Prince Philip’s funeral ceremony took place, with only 30 royal family members and associates attending. Prince Charles was the one that led the procession behind his father’s coffin which made its way to the chapel as the gunshots rang out.

Kate Middleton was among the present, joining other royals such as the Duchess of Cornwall in waiting outside the church as a mark of respect as the procession made its way past.

After the whole church service, the Duchess of Cambridge was seen talking with Prince Charles and his wife Camilla. Kate then showed her support for the prince by leaning in to kiss him as they said their goodbyes.

Prince Charles looked noticeably upset as he followed his father’s casket to the church.

After this tragedy Prince Charles would need all the support he can get, as losing ones father is a huge burden, but Prince Charles will now be expected to step up with his royal duties, with no real time to grieve, so Kate’s small gesture is very welcomed.

The period of national mourning has ended, with the Royal family continuing to grieve this week after the Duke of Edinburgh’s funeral.

After 73 years of marriage and 70 years of being head of state with him, the Queen will reign without her husband for the first time. The monarch sat on her own as she followed the funeral service, which was planned with Prince Philip’s input and celebrate his life and legacy.

The ceremony in St George’s Chapel at Windsor Castle on Satruday reflected his lifelong support for the armed forces, with him having a close connection with the Navy for more than 80 years.

HIs coffin, draped with his personal standard, had his Admiral of the Fleet naval cap and sword laid next to a wreath of white flowers chosen by the Queen with a handwritten card from his wife of 73 years.

The procession had Prince Charles at the front, joined by the Princess Royal, Duke of York and Earl of Wessex as they walked behind Philip’s coffin. The coffin was carried by a Land Rover that the Duke of Edinburgh himself helped designed just for this occasion.

After them, following them closely were the duke’s grandsons the Duke of Sussex, Duke of Cambridge and Peter Phillips, and Vice Admiral Tim Laurence, the Princess Royal’s husband, and the Queen’s nephew the Earl of Snowdon.

The two brothers, Prince William and Prince Harry, were separated by their cousin Peter Philips. Despite all kinds of theories for what the reason for this might be, from the reported rift or strained relationship, the real answer is quite simply. Prince William being the second-in-line to the throne, while Peter Philips is the Duke of Edinburgh’s first grandchild, so both of them have symbolic meaning to be together in the front rows.

Further disproving the theory of a big rift between them is the fact that after the ceremony, the two brothers were seen talking and walking together. With William’s wife Kate also joining them.