For the first time Prince George and Princess Charlotte will attend the Royal Family Christmas church service this year, according to reports. The two will also join their parents, the Duke and Duchess of Cambridge, for the traditional walk to church from the Sandringham estate.

Every year lots of members of the Royal Family come together for this event, as they stroll to the St Mary Magdalene church in Sandringham, Norfolk, and this year two new members will join them, the six- year-old Prince George and four-year-old Princess Charlotte.

Each year the media are there as well, waiting for that one opportunity of taking photos as the royals are entering and leaving the church. Some fans do that as well, camping near the site so that they can get the best spots early in the morning to see the royals.

“It will be so sweet. George and Charlotte will make their Christmas debut, as long as they’re both on good form on the day,” a royal source told the publication.

“It’s the picture all royal fans want to see. The royals walking to church on Christmas Day is a rite of passage and so William and Kate didn’t want to expose their children too early, but they feel they’re old enough now.

“After all the negative focus on Prince Andrew, these pictures will also emphasise the positive future of the royal family,” they added.

The youngest of the Cambridge family, Prince Louis, who is only 18 months old, will stay at home with his nanny.

This is not the young royals’ first Christmas church service, however.

In 2016, the then-family of four spent Christmas with Duchess Kate’s parents, rather than attend the Royal Family festivities, and were pictured together outside a church in Norfolk. 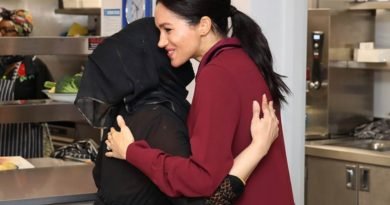 Meghan Just Made A Surprise Visit To Hubb Community Kitchen