On Saturday, Prince William and Kate surprised royal fans by sharing a new adorable video of their children. In it, Prince George, Princess Charlotte and Prince Louis each put one question to Sir David Attenborough.

The video was shared on The Cambridges official Twitter account. The captions reads:  “Sir David Attenborough, we’ve got some questions for you.”

This marks the most we have ever heard from Prince George and Princess Charlotte, but also the first time we have heard little Louis.

As the oldest child, Prince George goes first. He asked: “Hello David Attenborough, what animal do you think will become extinct next?”

Sir David then replied: “Well let’s hope there won’t be any because there are lots of things we can do when animals are in danger of extinction – we can protect them.

“We showed pictures of them on television around the world and people thought how terrible it would be if these became extinct.

“So they subscribed lots of money and lots of people came to help and now there are over 1,000 of them.

“So you can save an animals if you want to and put your mind to it. People round the world are doing it because animals are so precious so let’s hope there won’t be anymore that’ll go extinct.”

Then it was Princess Charlotte’s turn. Looking super cute, with her hair tied back, the little Princess asked: “Hello David Attenborough! I like spiders – do you like spiders too?”

Attenborough said that he loved the “wonderful” animals. “Why is it that people are so frightened of them. I think it’s because they have eight legs – much more than us.

“If you’ve got eight legs you can move in any direction. You can never be quite sure which way that spider is going to go.”

Last, but not least, Prince Louis took a deep breath before excitedly asking “What animal do you like?”

Sir David revealed that he loves monkeys because they’re “such fun”.

“They can jump all over the place.” But he also said that you couldn’t have a monkey in your home so eventually, he opted for a puppy. 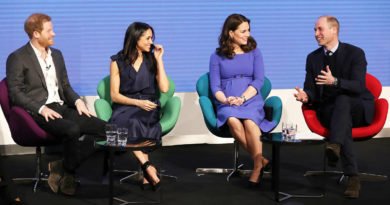