Being a parent is a peculiar job, to say the least, oftentimes stumbling upon strange situations. And being a royal makes no difference. Being proud parents to three children, the Duke and Duchess of Cambridge also must face these challenges. One such thing is that every morning, their oldest, Prince George, wakes them up by playing his favourite football anthem, Three Lions.

Frank Skinner, who made the hit song back in 1996, revealed how he discovered that the young royal was a fan of his song when he met with Prince William at the Royal Variety Show. As William spoke to Frank, he told him: “I listen to your song every morning. Honestly, George plays it every morning ever since the World Cup. I thought it would fade away but it hasn’t. he still plays it every day.”

Prince George is known for his love of football, often being seen playing with this younger sister Princess Charlotte in their garden or just simply kicking a ball around. He is such a big fan that for his sixth birthday portraits, the Duke and Duchess of Cambridge released images of him wearing the England football shirt.

This year in October, he and his sister got to go to their very first football match when they were seen with their parents at Norwich’s Carrow Road football ground to watch the Norwich City v Aston Villa match. Prince George looked ecstatic, cheering on his favourite team, Aston Villa, as they scored multiple goals, much to his delight.

This was a pretty busy year for the young royals as well, as they started being more in the spotlight and had more public outings. Both Prince George and Princess Charlotte made their Christmas Day debut this year, walking hand-in-hand with their parents as they walked along to church with the rest of the royal family, and later stopped to speak to members of the crowds.

This year, the entire Cambridge family spent Christmas with the rest of the extended royal family and the Queen at her Majesty’s estate in Sandringham. In December 2018, Zara Tindall’s husband Mike gave a rare insight into the royals’ festivities while appearing on the House of Rugby podcast.

Asked whether Christmas is good at the castle, Mike replied: “Yeah it is good. So Christmas Day is a little quieter because it’s actually a cold buffet because they give everyone the day off, and their big day is Christmas Eve.” Mike also explained that the family all sit around to watch the Queen’s speech together “with a little glass of something.”

READ NEXT: The Touching Story Behind The Pink Flamingo Charlotte Was Carrying 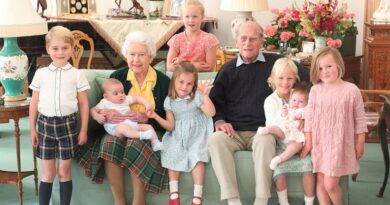