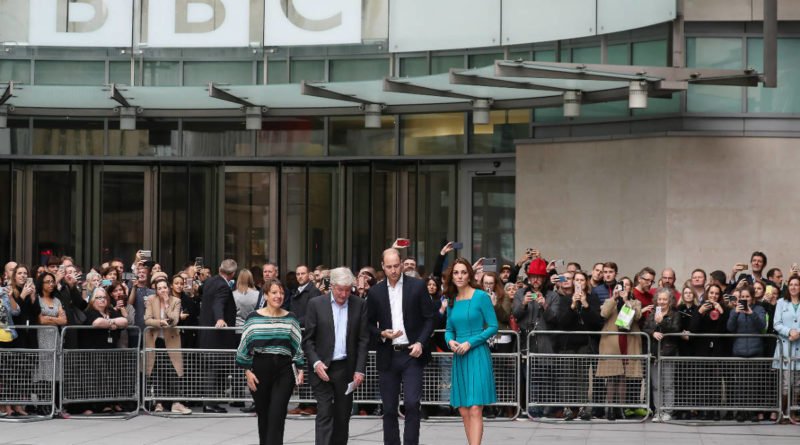 While everyone was focused on Prince William and Kate when they visited the BBC’s Broadcasting House on Thursday, Prince Harry and Meghan also managed to carry out their engagement quietly, just a few miles away.

The Court Circular revealed that the Duke and Duchess of Sussex made a private visit to BBC Studioworks at the Television Centre in White City. The couple attended a Mental Health Innovation volunteer’s workshop, however, the engagement was a private one, their visit being made public just now. In the meantime, William and Kate were also carrying out their visit to the BBC, only in the Broadcasting House in Marylebone. The Duke and Duchess of Cambridge marked Anti-Bullying Week and there they had a chance to talk with tech companies, parents and children who work to create a safer environment online. William made one great speech, in which he urged the tech giants to fight the dangers of the web, including fake news, trolling and cyberbullying.

The Duke, who convened the Taskforce on the Prevention of Cyberbullying after becoming a new dad to Prince George, said: “I saw that my friends and peers were worried about the risks of the very powerful tools we were putting in our children’s hands. For too many families, phones and social media shattered the sanctity and protection of the home. “As we grappled with this, we felt a distinct absence of guidance. Should we read our children’s messages? Should we allow them to have phones and tablets in their rooms? Who do we report bullying too? We were making up the rules as we went along.”

“Surely you can partner with parents to make the online world a safe place of discovery, friendship, and education for their children. You can work in the interest of the children and parents who use your products and still make your shareholders happy. We not only want you to succeed. We need you to.”

READ NEXT: Why William And Harry Always Drive The Cars When Going To Party?