Harry And Meghan want to keep up the positive thinking through these turbulent times filled with change and encourage their fans to do the same. The couple went on Instagram and posted a positive message, saying how they want to follow only positive news online, as well as suggesting their fans do the same by the following Tank Good News, the only page the couple’s account follows, which only shares updates on all the inspiring and positive things happening in the world.

Prince Harry and Meghan wrote: “Happy 1st of March everyone! This month, we continue on the good news path and are pleased to be following @TankGoodNews, as a reminder of all the good that is happening in the world. We hope it uplifts and inspires you!”

The response to this message was overwhelmingly positive, with fans praising the couple on their mentality. One fan wrote “Fantastic! Keep up, I love seeing all the great content to uplift others,” while another wrote: “More kindness is always welcome.” A third added: “What a beautiful thing to wake up to, thank you. The royal couple also shared a second post on Instagram shortly afterwards, to wish their followers a Happy St David’s Day. Prince Harry and Meghan posted a number of pictures of themselves from a visit to Wales, and wrote: “Dydd Gŵyl Dewi Hapus! Wishing all of our Welsh followers a Happy St David’s Day.”

Prince Harry has been wrapping up with some final engagements as a senior working member of the royal family these couple of days. On Wednesday, the Duke hosted a summit for Travalyst in Edinburgh, where he unveiled a new holiday scheme to help tourists pick environmentally-friendly flights.

At the start of the event, the royal took to the stage to make a speech and was asked how he should be addressed by host Ayesha Hazarika. She reveals that he simply said to address him by his first name. “He’s made it clear that we are all just to call him Harry. So ladies and gentleman, please give a big, warm, Scottish welcome to Harry.” On Friday, Harry met with rock legend Jon Bon Jovi at Abbey Road Studios in London, to record a special single for the Invictus Games Foundation.

Meghan, on the other side, has been lying low in Canada, where the couple and their baby son Archie have been living for the past month. The two of them will officially step back from their roles as senior royals from 31 March, which leaves lots of things uncertain, such as what is their plan for the future and where will we be seeing them make public appearances in the future. Royal sources say that the two will try to split the time spent between the UK and North America equally, but only time will tell how that works out.

READ NEXT: When Will We Next See Archie Harrison? 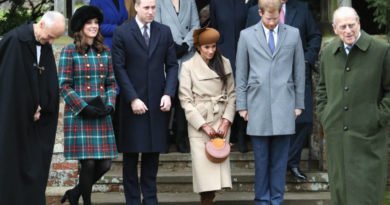