On Sunday, to mark St David’s Day, Prince William and Kate posted a photo on their official Instagram account from their trip to Wales. The photo shows the couple smiling as they hold Welsh dragons. They visited Tata Steel on February 4, where they were given the toys for their children Prince George, Princess Charlotte and Prince Louis.

Prince William and Kate joined Prince Harry and Meghan, who also shared couple of photos to mark the day.

Prince Harry and Meghan posted four photos from a visit to Cardiff in January 2018. The caption reads: “Dydd Gŵyl Dewi Hapus! Wishing all of our Welsh followers a Happy St David’s Day.”

It was posted alongside a photo of Her Majesty greeting the public during a visit to Caernarfon Castle, North Wales in 2010.

Prince William and Kate are set to embark on a 3-day royal tour to Ireland. They will visit the country from March 3 to 5, 2020 at the request of the Foreign and Commonwealth Office.

READ MORE: How Are William And Kate Known As In Scotland And Ireland?

The couple will make visits to Dublin, Galway, County Meath, and County Kildare during their stay. According to the Palace, their trip will “focus on the relationship between [the UK and Ireland], and build on the theme of remembrance and reconciliation.”

The statement continued: “Following Her Majesty the Queen’s historic visit in 2011, the visit will also focus on the relationship between the two countries and build on the theme of remembrance and reconciliation.”

READ NEXT: The Palace Announced New Engagement For Duchess Kate 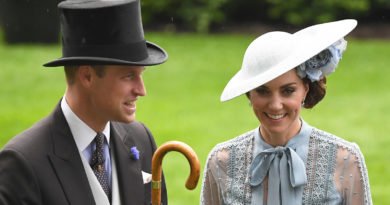