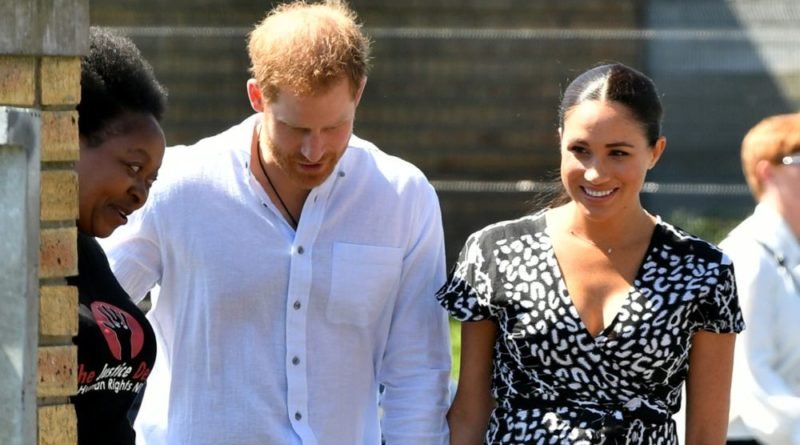 Harry and Meghan have officially kicked off their Africa Royal Tour as they arrive Nyanga Township. It is often described as South Africa’s ‘murder capital’ amid high security.

Archie Harrison is not joining them on this afternoon’s engagement and will remain at their residence with his nanny.

The royal couple are in Nyanga to learn about the work the Justice Desk, a human rights organisation, is doing to support the development of Nyanga township children. It is also supported by the Queen’s Commonwealth Trust, which has Harry as its president and Meghan as vice-president.

It is also supported by the Queen’s Commonwealth Trust, which has Harry as its president and Meghan as vice-president.

Harry and Meghan received a warm welcome by cheering schoolchildren when they arrived at their first stop – the Nyanga Methodist Church. They met Jessica Dewhurst, the Justice Desk founder, and Theodora Luthuli, a community leader with the charity.

They held hands as they watched dancers performing in traditional costume and listened to live music while ecstatic youngsters waved their national flag.

Meghan looked stunning in a black and white wrap dress by Mayamiko, an “ethical and sustainable woman’s wear and life style brand” from Malawi. She paired it with some chic wedges.

Their next stop is the District 6 Museum, which highlights the injustices of the apartheid era.

From the Museum, Harry and Meghan will visit District 6 Homecoming Centre, which provides a meeting place for former residents of the area. It will be a focal point for the couple to learn about the history of the area and meet former residents.

The family of three arrived in Cape Town 40 minutes late this morning following their overnight British Airways flight from London.

The royal tour comes after a busy weekend, as Harry and Meghan attended Misha Nonnoo’s Rome wedding. They apparently then flew home to England to pick up baby Archie ready for the royal tour.