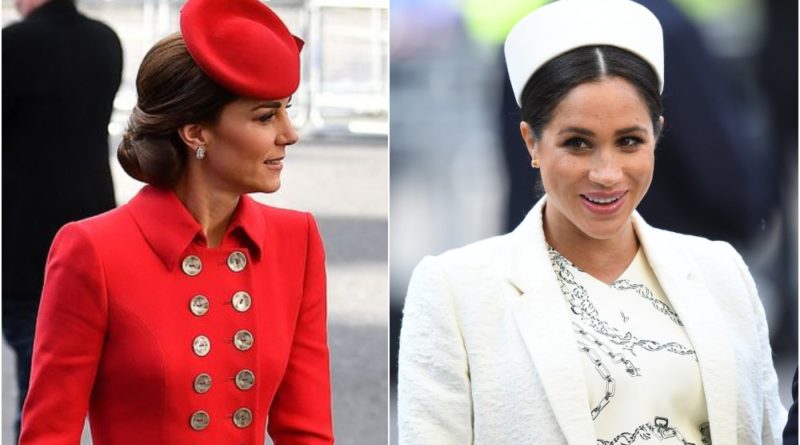 On Monday, Harry and Meghan joined forces with William and Kate for a high-profile royal outing with Queen Elizabeth.

The Fabulous Four attended the annual church service at Westminster Abbey for Commonwealth Day. The royal family steps out every year to attend the service. However, 2019 is especially significant as it marks the 70th anniversary of the modern Commonwealth.

This is the second joint engagement for Kate and Meghan in a week. They were seen together last Tuesday, at a reception in the White Drawing room at Buckingham Palace thrown by the Queen to mark the 50th anniversary of her son Charles’ investiture as Prince of Wales last Tuesday. Harry and Meghan were among the first to arrive for the special service. She wowed in a white coat and hat, paired with a printed Victoria Beckham dress, a dark green clutch, and dark green heels.

William and Kate arrived shortly after the Duke and Duchess of Sussex. Kate wore a red Catherine Walker coat with buttons lining the front.

It is the same poppy red dress she wore when she stepped off the plane in New Zealand in 2014.

She accessorized her outfit with a neutral suede clutch and pumps by Emmy London. Inside the church, Kate and Meghan had a sweet moment inside Westminster Abbey. The duchesses exchanged a friendly kiss on the cheek as they greeted each, while the brothers shook hands. The theme for this year’s service is “A Connected Commonwealth”. It highlights the co-operation between the culturally diverse family of nations who work together in friendship.

The Queen, who is head of the Commonwealth, says in her message: “In April last year, I welcomed the leaders of our 53 nations to Buckingham Palace and Windsor Castle for the Commonwealth Heads of Government Meeting, and we all witnessed how the Commonwealth vision offers hope, and inspires us to find ways of protecting our planet, and our people.

“We are able to look to the future with greater confidence and optimism as a result of the links that we share, and thanks to the networks of co-operation and mutual support to which we contribute, and on which we draw.

“With enduring commitment through times of great change, successive generations have demonstrated that whilst the goodwill for which the Commonwealth is renowned may be intangible, its impact is very real.”

Earlier in the day, Harry and Meghan celebrated at Canada House in London, where they met with a group of kids who taught them how to make special maple candy.

READ NEXT: Baby Sussex Will Have This In Common With The Queen, Charlotte And Louis