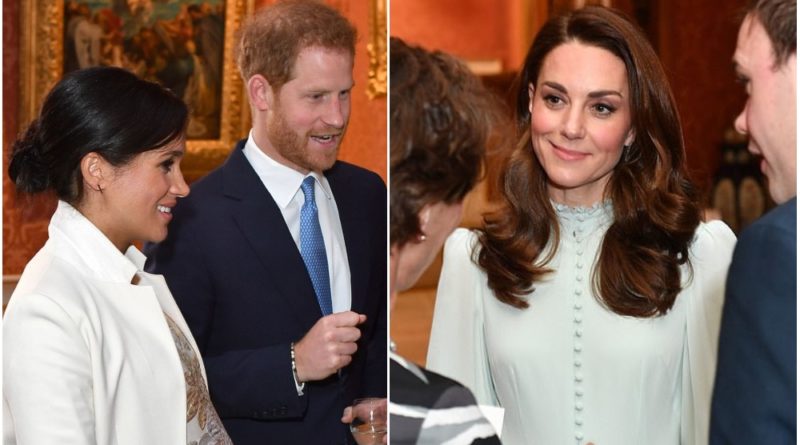 The Duchesses of Cambridge and Sussex have reunited for the first joint engagement after they were seen together attending the annual church service at Sandringham on Christmas Day.

Kate and Meghan accompanied by their husbands attended a reception in the White Drawing room at Buckingham Palace thrown by the Queen to mark the 50th anniversary of her son Charles’ investiture as Prince of Wales.

Mom-of-three Kate wowed in a floaty pale blue dress, with ruffled sleeves and a high neck with button details. perfect for the spring weather. She teamed the dress with a pair of simple nude court shoes, a matching blue quilted box clutch and a pair of Cassandra Goad Temple of Heaven gold earrings.

Duchess of Sussex looked fresh and glowing as she arrived with the Duke of Sussex. She looked stunning in an embossed gold dress and a lovely white coat by Amanda Wakeley she first wore to the Commonwealth in 2018.

She wore an oyster silk clutch by Wilbur and Gussie and Paul Andrew ‘Pump it Up’ stilettos to match. Meghan accessorized her outfit with Les Plaisirs de Birks Bar Earrings. The special event celebrated Prince Charles’ commitment to his Welsh patronages and charities. It was hosted by Her Majesty, and featured guests representing the charitable organisations Charles has supported over the decades.

Charles was created the Prince of Wales at the age of nine, on July 26 1958, and was formally invested with the title at Caernarfon Castle by the Queen on July 1 1969.

Among the guests will be leading figures in Welsh and UK public life and representatives from The Prince of Wales’s many Welsh charities and patronages like The Prince’s Trust Cymru, Llangollen International Musical Eisteddfod and the BBC National Orchestra & Chorus of Wales. The reception will culminate with a musical performance in the palace ballroom by students from the Royal Welsh College of Music and Drama, which Charles supports as patron.

READ NEXT: See Who Harry Secretly Took With Him On Trip To Birmingham

How George And Charlotte Spent Their Half Term With Kate Revealed