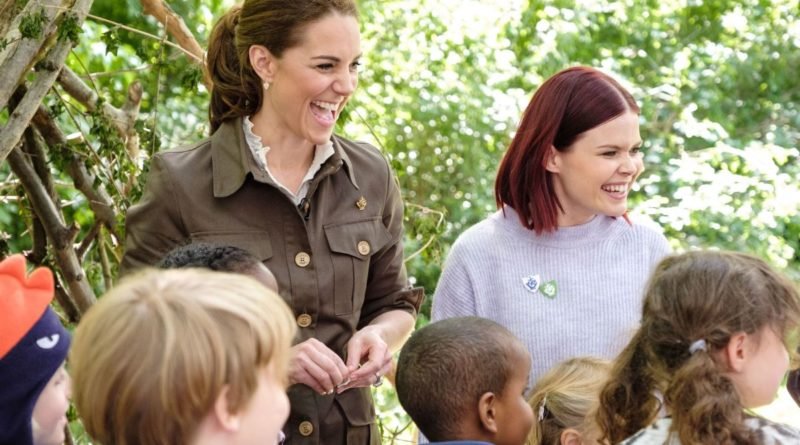 On Thursday, Kate made a surprise appearance on the popular, long-running BBC kids’ show Blue Peter to launch a royal garden competition.

It encourages children to design a sculpture for her garden Back To Nature which will be shown at the RHS Garden Wisley in Surrey later this year in September.

During her appearance on Blue Peter, the Duchess paid a special to her husband William. And we almost missed it!

During their second activity, they upcycled old household items and wellies into plant pots. The Duchess planted a Dianthus Barbatus, a pink and white bloom, into a silver watering can. Dianthus Barbatus is better known as a Sweet William – a sweet nod to Prince William.

During the episode, Kate spent time with a group of children outdoors and ask them questions about the environment.

“What things have you guys found when you’ve been here? Do you know what the tadpoles eventually turn into? Have you ever seen any froggies?” Kate asked the children, ITV reports.

Speaking about encouraging people to enjoy nature more, Kate told presenter Lindsey Russel: “It encourages creativity, confidence and even a short amount of time – 10-15 minutes outside – makes a huge difference to physical well-being but also to our mental well-being.”

Also, in the show, Kate and Lindsey will be challenged to a team-building competition by the young gardener and RHS ambassador George Hassall. They will be split into two teams and have to take part in various activities.

The competition will launch on Blue Peter on CBBC today at 5.30pm with the special film that Kate made with local school children at Westminster City Council’s Paddington Recreation Ground.

It will run until Tuesday, June 25 at noon, with the winning entry having their sculpture built and installed at The Duchess’s garden at RHS Wisley in September.