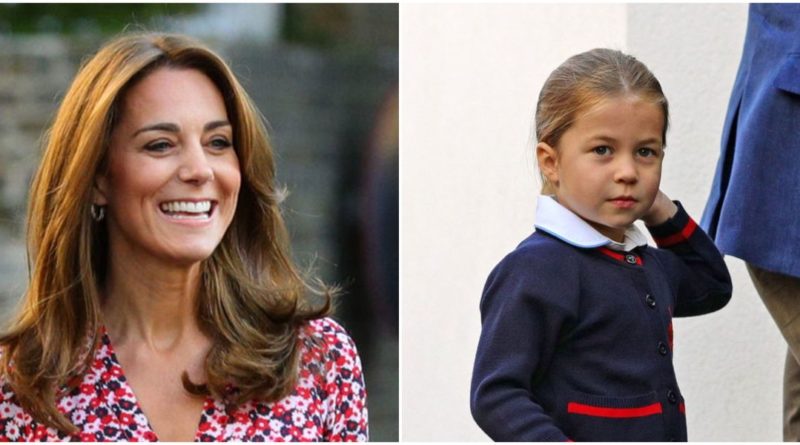 Just like for anyone else, the first day is always the most stressful, and it will be the same for the young Princess. But, luckily she’s got her older brother by her side. And mom Kate reminded her today of just that while she dropped them off for school.

In a video of the Cambridge family (minus boss baby Louis) approaching the school entrance, Kate can be heard telling Charlotte, “George will help lead the way.”

On their arrival, the royals were greeted by Helen Haslem, head of the lower school. For their entry, the royals take the side entrance, while all the other kids with their parents take the front gate.

The little Princess held on to mommy’s hand nervously as she approached the classroom, fiddling with her ponytail as she walked. But dad William summed up her feelings: “First day — very excited,” he said.

His wife Kate asked the headteacher: “How are you? Did you have a nice summer?”

Today, Charlotte was dressed in a brand new uniform, which is a dark dress and cardigan with a blouse, white socks and shoes. She had her hair in a ponytail fixed with a bow. Her mom was pictured carrying Charlotte’s bag to which had a key-ring in the shape of a pony’s head attached to it.

Brother George also wore his uniform which all pupils from reception to year two-sport; a navy and red jumper, smart navy shorts and a sweet pair of socks.

Hours after William and Kate dropped off George and Charlotte for school, they shared an official portrait of the siblings.

Before heading off Charlotte posed for a picture with her brother at the family’s Kensington Palace home. In the photo, the two have an arm wrapped around each other as they smile at the camera. How adorable!

“The Duke and Duchess of Cambridge are very pleased to share a photograph of Prince George and Princess Charlotte at Kensington Palace this morning. The image was taken shortly before Their Royal Highnesses left for Thomas’s Battersea,” Kensington Palace said in a statement.

READ NEXT: George And Charlotte Pose For A Sibling Portrait On First Day Of School