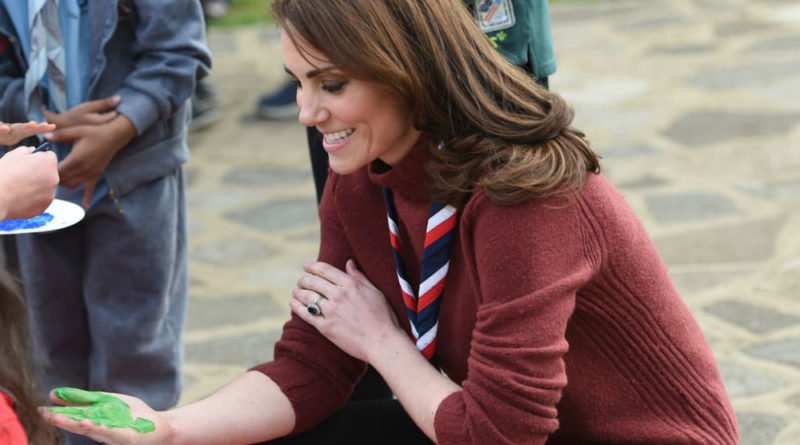 The Duchess of Cambridge is back out, doing her first public engagement of the week.

On Thursday, Kate visited the Scouts’ headquarters in Gilwell Park, Essex, to learn more about the organisation’s new pilot to bring Scouting to younger children and to celebrate the site’s 100th anniversary year.

For the occasion, Kate wore a green jacket, a red mock neck sweater from J.Crew, and black jeans for her day in the park. She finished off her look with See by Chloé boots and a scouting scarf, which was tied with a friendship knot!

Duchess Kate was greeted with a bouquet of flowers upon her arrival. She was all smiles as she chatted to youngsters kitted out in their Scouting uniforms.

Kate was also a Scouts volunteer when she and William lived on the island of Anglesey in north Wales during the first years of their marriage.

“She’s used her experience as a sailor to help them with knotting,” a local Scouts source told PEOPLE at the time.

“She’s been involved in managing games and joining in art and crafts activities. … We also pitched tents indoors in one of the sessions, and she remembered pitching tents.”

Moreover, in 2012 the palace announced the Duchess would become a Scout leader as part of her patronage of charities and bodies.

During her visit, Kate spent time with parents and leaders and children who are taking part in trials for a new pilot program for the youngest Scouts.

She also joined the youngsters in various activities to help them improve skills like communication and teamwork.

The mom-of-three was also shown around some of the historic locations at Gilwell Park by some older Explorer Scouts. Gilwell Park welcomes thousands of Scout groups, schools and youth organisations every year, offering young people the chance to discover the great outdoors.

The Duchess ended her visit by planting an oak sapling to help mark the 100th anniversary.

READ NEXT: The Sweet Link Charlotte And Louis Shared On Their First Outings