After attending the Wimbledon finals on Saturday, Meghan went out for a night with Prince Harry for the premiere of the “The Lion King” at Leicester Square in London on Sunday.

While attending the event, Meghan met Beyoncé, who voices Nala in the remake of the 1994 animated classic and her husband Jay-Z.

Although they have never met before, Meghan and Beyoncé each other and soon got engaged in conversation.

After Beyoncé told Meghan how nice it was to meet her, she was also heard talking about baby Archie: “The baby, so beautiful. We love you guys.”

Jay-Z also hugged and congratulated Meghan on Archie, before she introduced them to husband Harry.

“You’ve been rather busy,” Harry told Beyoncé, before Jay-Z told him: “Congratulations on the birth of your baby.”

Dad Harry asked Beyoncé and Jay-Z about their twins Rumi and Sir, who were born in 2017.

“They are not here. They don’t come on every trip,” Beyoncé answered. “We left them at home. They would love to have been here.”

Jay-Z even offered in some parenting advice for the new parents: “The best advice I can give you, always find some time for yourself.”

Meghan and Prince Harry are not the first royals to meet Beyoncé and Jay-Z.

Back in 2014, Prince William and Kate, attended a basketball game between the Cleveland Cavaliers and Brooklyn Nets at Barclays Center. And during the event, they met up with Jay-Z and Beyoncé at the arena.

Prince Harry and Meghan attended the Lion King premiere in support of the conservation efforts Disney has launched in tandem with the film.

Disney recently kicked off a campaign called #ProtectThePride, which aims to support the struggling lion population in Africa.

READ NEXT: Harry And Meghan Make Their Red Carpet Debut At The Lion King Premier 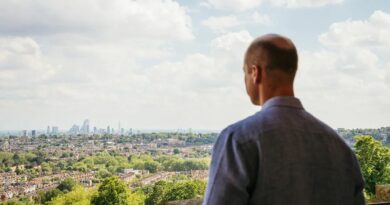