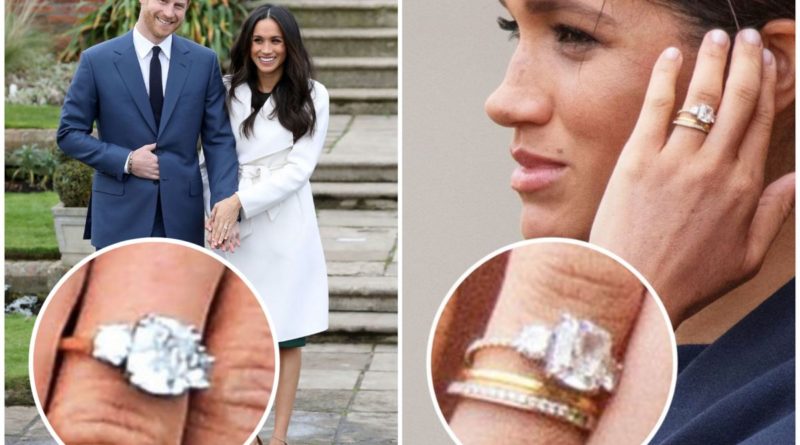 Back in 2017, the world was stunned by the beautiful diamond ring that Prince Harry gave Meghan Markle after they announced their engagement in November that year. Two years have passed since then, a huge wedding, a pregnancy and their first baby, but now fans have noticed that Meghan has touched up her engagement ring, which features two of the Late Princess Diana’s diamond.

The eagle-eyed fans noticed the change at Meghan’s first royal outing since going on maternity and that was at Trooping the Color. The previously iconic ring gold band has now been replaced by a delicate diamond studded band.

The initial design of the ring had a gold band and was made by Cleave and Company, Court Jewellers and Medalist to Her Majesty The Queen. The trilogy ring featured a large central diamond flanked on either side by two smaller jewels. The gems were handpicked by the Prince, with the central one being from Botswana, a country with huge significance to the couple as they previously vacationed together, and the other two diamonds are from his late mother’s personal collection.

“The ring is obviously yellow gold because that’s [Meghan’s] favourite and the main stone itself I sourced from Botswana and the little diamonds either side are from my mother’s jewellery collection, to make sure that she’s with us on this crazy journey together,” Harry said during the couple’s first sit-down interview with the BBC, hours after they announced their engagement.

We do not know when the change might have taken place, but it is speculated that it probably happened during the time she was pictured without it – many fans had thought she was not wearing it because of swelling due to pregnancy.

This marks the second time the Duchess has shown off a change to jewellery inventory at Trooping the Color. Last year at Trooping the Color it was confirmed that in honour of their first wedding anniversary on 19 May, Prince Harry gifted his wife with a stunning new eternity ring.

Meghan wore her sparkling accessory next to her Welsh gold wedding band and her three-stone diamond engagement ring. Eternity rings symbolize everlasting love and are usually given by a spouse to their wife to commemorate a milestone wedding anniversary or to celebrate the welcoming of a new child. The ring is also typically covered in diamonds in an infinite loop around the band.

READ NEXT: Prince Harry And Meghan Excited For Their New Project