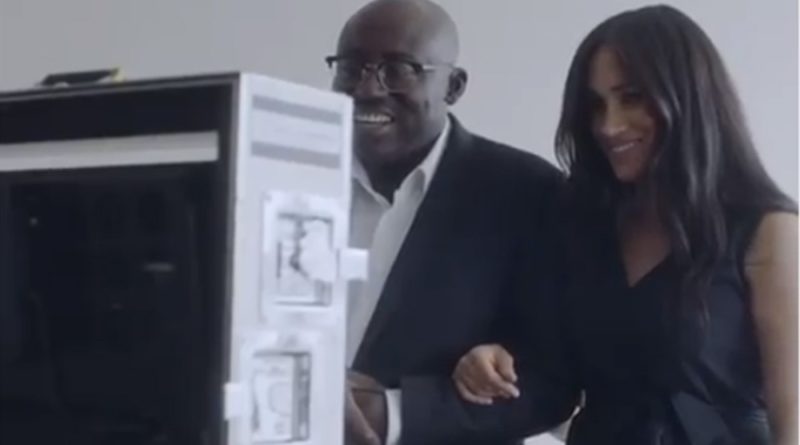 Instead of choosing to rest, the Duchess of Sussex apparently was working tirelessly throughout her pregnancy.

And today, Meghan shared a sneak peek video of the project. She can be seen in a behind-the-scenes clip promoting the Forces For Change issue, sporting a large baby bump as she stands arm-in-arm with Edward.

The caption of the video reads: “A sneak peek of the #ForcesForChange video for the September Issue of @BritishVogue. Her Royal Highness, The Duchess of Sussex is the first Guest Editor for British Vogue‘s September Issue and for the last seven months has worked to create an issue of inclusivity and inspiration, focusing on what connects us rather than what divides us.

“Fifteen women were chosen for the cover including New Zealand Prime Minister Jacinda Ardern, who generously lent her time to support The Duchess in this important issue. The women first met last autumn during Their Royal Highness’ official tour of New Zealand.

“Above, PM Ardern says: “One change that I’ve noticed over the course of my career, is just how polarised the world is now. I do think there is a solution to that though, and that’s ultimately us coming back to the humanity that we all share.” Thank you PM Ardern for being an amazing force for change.”

The Duchess of Sussex can be seen twice in the video. First she is shown close up, smiling as she works.

The second shot reveals her large baby bump, as she links arms with editor-in-chief, Edward Enninful.

In a statement, Meghan said: “These last seven months have been a rewarding process, curating and collaborating with Edward Enninful, British Vogue‘s Editor-in-Chief, to take the year’s most-read fashion issue and steer its focus to the values, causes and people making impact in the world today.”

The timing of the September issue will coincide with the launch of Prince Harry and Meghan’s new charitable foundation in the autumn, which will focus on “environment and community”.

READ NEXT: Meghan Will Be Guest Editor For September Issue Of British Vogue

Harry And Meghan Praised For Highlighting Non-Profit Cause