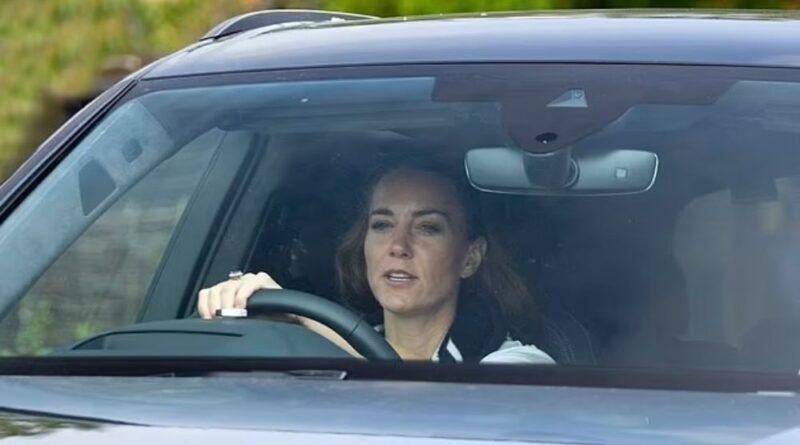 The photos, which were obtained by the MailOnline, picture Kate waving as she drove out of her estate earlier this morning and if defiance of the stress which comes with moving homes, the Duchess looked happy and relaxed.

The Cambridges undertook their move to Berkshire this weekend, just ahead of the start of the school year for their royal youngsters, for which they would be attending the Lambrook co-educational private school, near Ascot in Berkshire, with fees for all three royals at the 52-acre school totalling over £50,000 a year.

The Cambridge family will be using the beautiful 19th-century Adelaide Cottage after acquiring permission from Her Majesty to lease the four-bedroom Grade II home, which belongs to the Crown Estate.

However, William and Kate’s HQ for work will remain in London’s Kensington Palace, which will continue to house their office staff.

Perhaps a drawback of the family’s new home is that their full-time nanny Marie Teresa TurrionBorrallo will be living separately for the first time, and this also includes other staff such as the housekeeper or the chef, as Adelaide Cottage isn’t as vast as Kensington Palace or the 10-bedroom Anmer Hall.

But, a positive of the move is their proximity to both Her Majesty the Queen at Windsor Castle, and Kate’s parents and brother.

This royal move comes just as Prince Harry and Meghan Markle touch down in the UK for the first time since the Jubilee celebrations. The couple landed on Saturday morning after flying commercial from the USA, their children, Archie and Lilibet, were not seen with them.

“Prince Harry and Meghan, The Duke and Duchess of Sussex, are delighted to visit with several charities close to their hearts in early September,” a spokesperson confirmed last month.

READ NEXT: A Look Into Kate Middleton’s Greatest Looks Of 2022