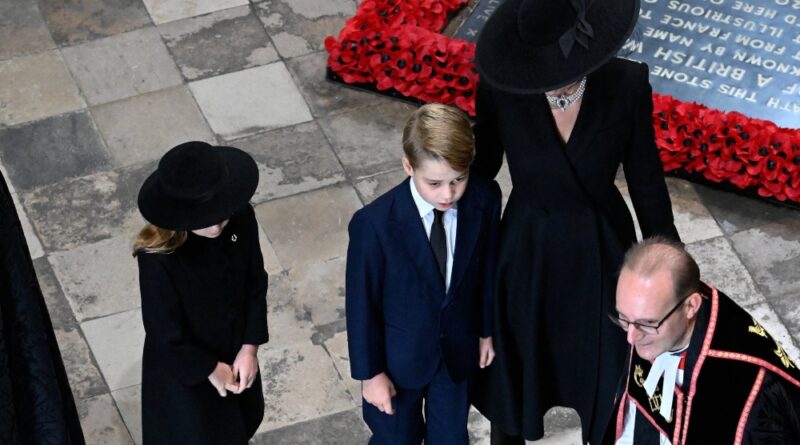 Prince George and Princess Charlotte attended Queen’s funeral alongside their parents, the Prince and Princess of Wales, at Westminster Abbey this Monday.

Princess Charlotte, seven, opted for a black dress complete with a black hat, whilst her nine-year-old brother, Prince George, was seen in a navy suit.

Prince Louis, however, it seems was deemed too young to attend the ceremony, and was therefore absent from the service.

Some royal fans may question why Prince George wore a dark blue outfit instead of a more traditional, black outfit, however, Queen’s funeral etiquette states that wearing dark colours to a funeral, which does include navy, is an adequate sign of respect for the deceased.

Initial plans had the young royals walk behind their parents in the procession, who in turn walked behind the late monarch’s coffin. These plans were altered to have them walk between Prince William and Princess Kate, with Prince Harry and Meghan Markle following behind.

The service is due to be conducted by the Dean of Westminster, David Hoyle, with Prime Minister Liz Truss and the secretary-general of the Commonwealth Patricia Scotland, reading Lessons.

Prayers will then be read by the Archbishop of York, then the Cardinal Archbishop of Westminster, the Moderator of the General Assembly of the Church of Scotland and the Free Churches Moderator.

Prayers will be followed by several hymns, which will include one sung at the Queen’s wedding back in 1947 when she was a 21-year-old bride to the late Prince Phillip, namely The Lord’s My Shepard, I’ll Not Want.

Following the hymns there will be The Last Post, two minutes’ silence, the Reveille, and the national anthem, the Queen’s Piper, Paul Burns, will play the traditional lament Sleep, Dearie, Sleep.

Her Majesty Queen Elizabeth II’s coffin will then travel in procession from Westminster Abbey to Wellington Arch before moving to Windsor.