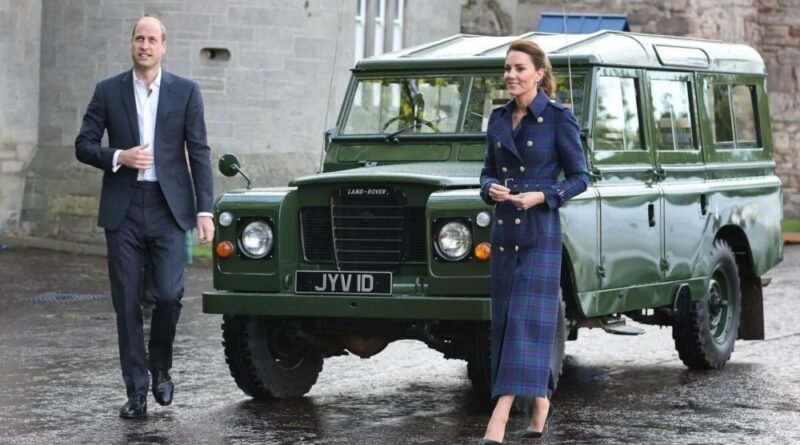 On Wednesday evening, Prince William and Kate joined guests for an outdoor screening of the new Disney movie Cruella.

The royal couple hosted NHS staff for the special drive-in screening of the movie in recognition of their hard work throughout the pandemic.

Prince William and Kate were pictured rolling into the carpark in a 2A Land Rover from 1966 that once belonged to the late Prince Philip, and which the Queen had loaned them for the occasion.

For the occasion, Duchess Kate wore a  beautiful, navy tartan coat combined with a pair of heels and earrings on loaned form the Queen.

The couple was also seen handing out popcorn to people as they arrived.

Ahead of their hosting of the movie night, Prince William and kate spoke via videocall with actresses Emma Stone and Emma Thompson. A short clip from the call appeared ahead of the couple’s arrival. William said: “I got propositioned by 96-year-old lady called Betty yesterday who wanted to kiss me. She’s in a care home with her daughter and I said, ‘Betty, if I do that, I’m going to get slapped on the back of the head for being inappropriate… social distancing!”

“This is what happens when I’m not around!” laughed Kate.

Emma Stone told the royal couple: “Oh it was so much fun, we were all over, we were all over London we were in front of Liberty. They transformed Carnaby Street into ’70s London, which was amazing.

“And then we were in front of Buckingham Palace at one point, I was riding a motorcycle around the Mall.”

William joked: “We should have you had you stopped Emma, it’s very dangerous.”

“I know, I know,” she replied. “I really got away with it, on my motorcycle… a car trailing me around Buckingham Palace.”

READ NEXT: Prince William And Kate Spotted During A Secret Date Night In St Andrews

Harry And Meghan Gave Each Other The Sweetest Anniversary Gifts