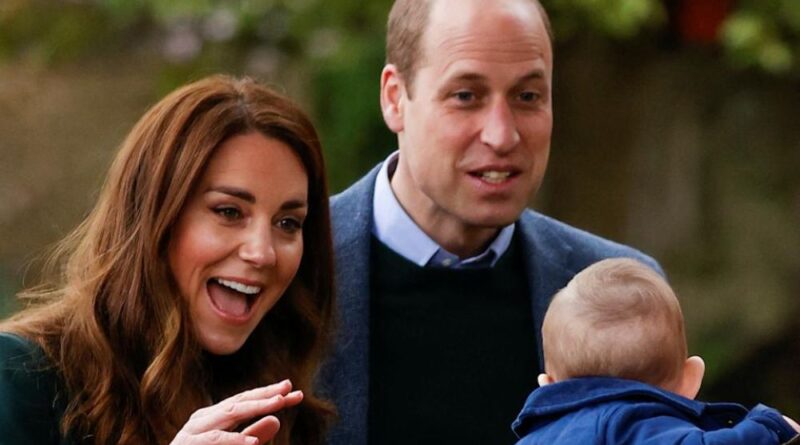 Throughout the week the couple attended all kinds of engagements, such as opening a new hospital in Orkney and making a visit to St. Andrews University, the place where the two royals would meet for the first time.

And during the tour, Kate was nothing if not stunning, wowing the public and the media with her choices of outfits, from stylish gowns to casual suits and trainers. And for her last day, the Duchess did not disappoint, going for multiple outfit changes during the day.

For their first engagement of the day, Prince William and Kate visited Starbank Park. The Duchess went all green for her outfit, wearing a forest green blazer from high street brand Massimo Dutti with colour matching trousers and added an element of fun with a great white and green polka dot blouse. She accessorized with a dainty gold chain necklace with Prince George’s initials, Princess Charlotte and Prince Louis on it.

Throughout the tour, and on many occasions in the past, the Duchess has made subtle tributes through her outfit and jewellery choices. One such example is from the first day of the Royal tour, when Kate went with a head-to-toe royal blue outfit, wearing a blue Zara blazer, which she colour matched with a sophisticated skirt by high street brand Hope. While fans obsessed over the look, some quickly realized how similar she looked to Princess Diana’s outfit back in 1992.

For her second look, the Duchess switched out her green outfit for a very chic tennis attire. The royal wore a Ralph Lauren knitted v-neck jumper and a pair of black trousers for the big game, finishing off her look with white Superga trainers.

We have seen Kate wear traditional knit back in 2019 when she played football with children at Windsor Park football stadium.

During her appearance at the Lawn Tennis Association’s Youth program, at Craiglockhart Tennis Centre in Edinburgh, the Duchess just couldn’t resist it so she joined the young ones for a game or two.

Wednesday was also an event filled day for the two royals, with the two of them starting the day by going windsurfing in St. Andrews. For this more adventurous outing, the Duchess wore her trusty Barbour coat that we have seen her sport on many occasions before such as in April whilst paying a visit to County Durham.

READ NEXT: Prince William And Kate Spotted During A Secret Date Night In St Andrews

This was paired with some dark-blue skinny jeans and chunky brown boots from designer brand Chloe which cost a whopping £365.

Then the two royals headed out to visit St. Andrews, the place where they met for the first time when they were just college students. For this stroll down memory lane, Kate wore a heritage style blazer from Holland and Cooper and a brilliant pair of white metallic Veja trainers. Casual, yet elegant.

For her fourth appearance on Wednesday, Kate and William attended a drive-in cinema to catch a preview of Disney’s new movie Cruella.

This time William also took some of the spotlights, looking classy in a suit, but you can’t really outshine Kate, who stole the show with a beyond beautiful Holland Cooper blue tartan trench coat, all the while paying tribute to the country. She finished off the look with a pair of sparkling diamond earrings that perfectly matched her iconic wedding ring and a pair of emerald green court heels.

On Tuesday, the Duke and Duchess of Cambridge visited the European Marine Energy Centre. For this outing Kate went full casual, simply wearing a pair of blue jeans and chunky brown suede boots, as well as a practical Seeland jacket, a brand known for their outdoor collections and hunting attire.

We had previously seen the Duchess wear the same ensemble earlier this year, when she and William visited Manor Farm in Darlington in April.

Then on Tuesday the Duchess changed into a more monotone look, wearing a mel coat from brand Massimo Dutti.

Kate previously wore the stunning coat during an appearance at the Ely and Careau Children’s Centre in Cardiff, Wales in January.

Underneath the tailored suit, Kate went with a camel Max Mara wide-leg trousers and matching knit. She finished the look with a traditional tartan pattern scarf, which paid homage to the city which she originally wore in 2013. There was also another tribute in here, with her long beige coat resembling another of Princess Diana’s looks. Back in 1982, Diana attended an appearance at the Wandsworth DHSS office sporting a wonderful beige trench coat by designer Caroline Charles.

In only four days and dozens of outfits, Kate has no doubt managed to impress the whole of Scotland with her fashion choices.