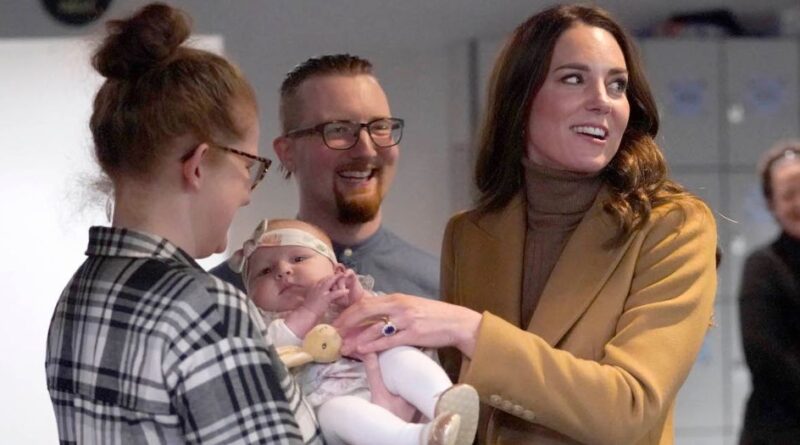 It seems that three children are enough for Prince William as he told the Duchess of Cambridge not to get “any ideas” on their most recent visit to Burnley and Clitheroe.

While there the two visited Clitheroe Community Hospital where they met with new parents Trudi and Alastair Barrie and their newborn daughter Anastasia.

Kate, who just celebrated her 40th birthday, got the opportunity to hold and cradle Anastasia while the baby’s parents and other people in the room looked on.

The humorous moment came as she was holding the baby and the people in the room let out a group “Awww”, prompting Prince William to jokingly say: “Don’t give my wife any more ideas!”, with the people there bursting out laughing subsequently.

As Kate gave the newborn Anastasia back to her parents, William commented once more: “Don’t take her with you.”

The royal couple travelled to Lancashire on Thursday the 20th of January, where they met with staff from the hospital and thanked them for the work they have been doing during the pandemic.

The visit was filled with sweet moments, with the Duchess sharing a special moment with a 10-week-old cockapoo named Alfie, who will be trained as a therapy dog.

Kate and Prince William are the proud parents of three children: Prince George, 8, being the oldest, Princess Charlotte, 6, and the youngest, Prince Louis, 2.

Back in 2020, during a visit to Khidmat Centre in Bradford, Yorkshire, Kate hinted that Prince William doesn’t want any more children to the fans gathered in front of the building.

After meeting with leaders from various faith and community groups in the area, Kate talked with royal fan Josh Macpalce, who told the Duchess that he had sent cards congratulating her after each of her three children were born.

She told the 25-year-old at the time: “I don’t think William wants any more.”

In the 2015 documentary, titled When Ant and Dec Met the Prince: 40 Years of The Prince’s Trust, William opened up about fatherhood, revealing that being a parent had made him “a lot more emotional than I used to be”.

“I never used to get too wound up or worried about things,” he said in the documentary. “But now the smallest little things, you well up a little more, you get affected by the sort of things that happen around the world or whatever a lot more, I think, as a father.

“Just because you realise how precious life is and it puts it all in perspective. The idea of not being around to see your children grow up [is horrible].”

Why William, Kate And The Children Won’t Return To London?

Prince William Reveals How He Scared George, Charlotte And Louis