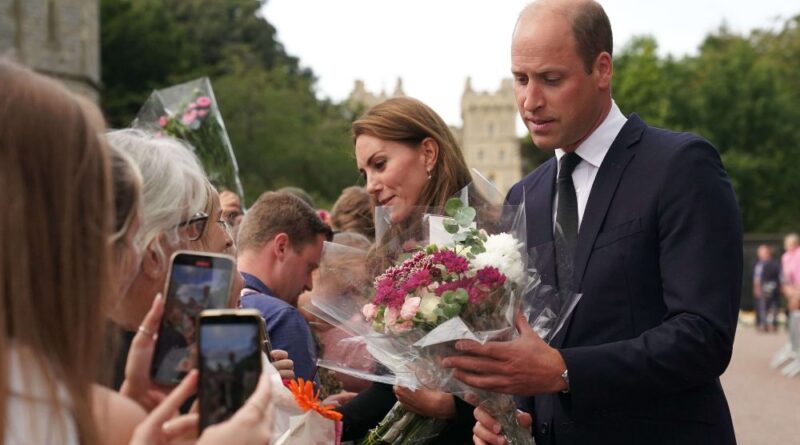 On Saturday, two days after the Queen’s death, Prince William and Kate joined by Prince Harry and Meghan stepped out for a walkabout to view all of the tributes for the late monarch.

They also spent some time chatting individually with the mourners who had gathered throughout the day outside the castle.

Chatting with one member of the public, Prince William revealed how he has been dealing with his grief following the death of his Granny, The Queen.

“Awww, look! Who’s this?” the Prince of Wales asked when speaking to a woman with her dog in the crowd.

William then remarked: “Dogs at this time are so important. I give my dog a lot of cuddles at the moment.”

Just like his late grandmother, William, and we believe the whole family, are fond dog lovers. They currently own a black cocker spaniel puppy named Orla, which means “golden princess”.

Kate’s brother James bred a litter of cocker spaniel puppies last summer and gifted the new puppy to his sister before their other dog, Lupo, passed away late last year.

During the walkabout, Kate seemingly touched upon the reunion, telling one onlooker: “At times like this, you’ve got to come together.”

Meanwhile, Queen Elizabeth cared for more than 30 corgis across her lifetime. Moreover, her love of corgis was well documented with many photos and she reportedly said that “my corgis are family”.

Now The Duke and Duchess of York will inherit two of the Queen’s most prized possessions, her corgis.

She is also reported to have left behind a mixed breed “dorgi” called Candy and a cocker spaniel named Lissy. However, there is no information on who will be looking after Candy and Lissy.

READ NEXT: Why Going Back To Balmoral Was So Painful For William And Harry