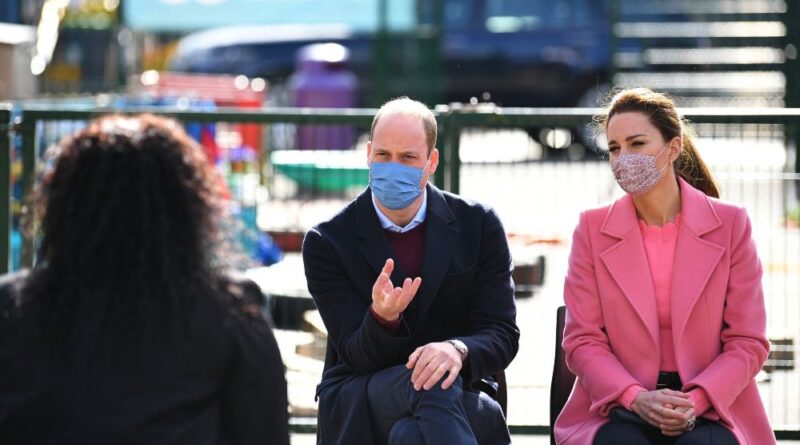 The two royals, Prince William and Duchess of Cambridge finally directly commented on the situation during their latest engagement in east London.

On Thursday the Duke and Duchess of Cambridge visited a school in east London, and during the visit made their first official comments on the interview Prince Harry and Meghan had with Oprah.

William told a reporter: “We’re very much not a racist family.”

The Prince was then asked if he had reached out  to his brother after the interview, with William saying: “No I haven’t spoken to him yet but I will do.”

On Tuesday night Buckingham Palace released a statement in response to the Duke and Duchess of Sussex’s interview, in which Meghan claimed that Prince Harry told her about a conversation he had with a family member where there were “concerns” over Archie’s skin tone when he was born.

The issue statement was on behalf of the Queen, and it went as follows: “The whole family is saddened to learn the full extent of how challenging the last few years have been for Harry and Meghan.

“The issues raised, particularly that of race, are concerning.  While some recollections may vary, they are taken very seriously and will be addressed by the family privately.

“Harry, Meghan and Archie will always be much loved family members.”

The Duke and Duchess of Cambridge’s outing was a visit to School21 in Stratford, marking the rollout of secondary schools of Mentally Healthy Schools, an initiative first started by Kate back in 2018.

The Duchess was looking great as ever, in a bubble gum pink coat from Max & Co, combined with a matching scalloped jumper from Boden and black trousers.

This is the first week that students will be returning to the classrooms since before Christmas, so Kate and William heard about how children at the state-funded school for pupils, which range from four to eighteen-year-olds, will be given access to lessons on tackling anxiety and depression.

All those classes are available on a website funded by an initial 800,000 pounds from the Royal Foundation of the Duke and Duchess of Cambridge and Prince Harry, with Kate being the one who unveiled the project during a visit to Roe Green Junior School in Kingsbury, north West London, three years ago.

During the visit, Prince William and Kate also talked with the children from the school who were playing on the playground as they were in a play session. Some of those were digging for treasure in a sandpit.

“Have you found any treasure yet?” Kate asked the pupils. She then asked them on how it was like to finally be back at school: “Is it fun to be back with all your friends?”

The Cambridge spent all three lockdowns at their country home in Norfolk, Anmer Hall, and only recently returned as their two eldest children had to go back to school. Prince George and Princess Charlotte finally got to return to their school, Thomas’s Battersea, in London earlier this week. Lets home this time for a longer period.

READ NEXT: How Kate Sent Message Of Reconciliation To Meghan With Earrings