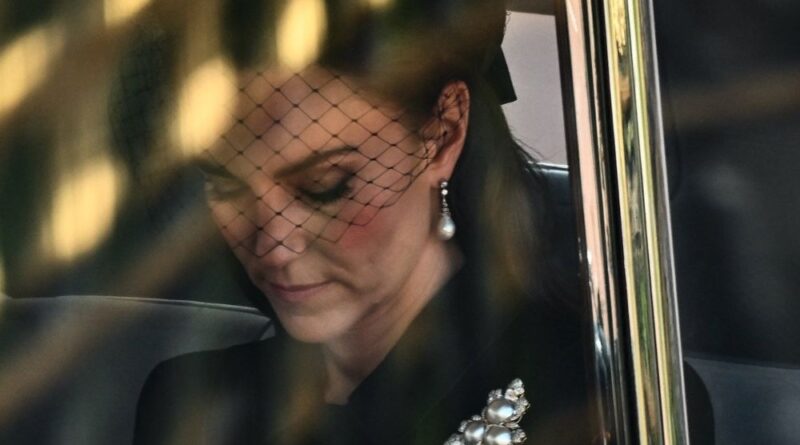 On Wednesday, member of the Royal Family took part in a parade led by King Charles III behind the Queen’s coffin from Buckingham Palace to Westminster Hall, where Her Majesty will lie in state.

Among the attendees was Kate, the Princess of Wales, who was photographed riding alongside Camilla, Queen Consort.

Adhering to the royal mourning protocol, she was dressed in a black ebony coat dress and a traditional mourning veil crafted from black netting for the occasion.  Kate also paid tribute to the late monarch by adding a diamond and pearl leaf brooch.

The brooch has been worn by Queen Elizabeth II only once, on her 73rd birthday in April 1999 while attending a concert in Seoul, South Korea. The brooch is composed of three leaves, each outlined in yellow gold.

This is not the first time that Kate has worn the brooch passed down to her by the late Queen. Kate was first seen wearing it in 2017 while attending a service to mark the centenary of the Battle of Passchendaele in Belgium

To the service, Kate rode with Queen Camilla. They are now the two highest-ranking women in the royal family as Queen Consort and Princess of Wales.

Meghan Markle, who rode with Sophie, Countess of Wessex, while William and Prince Harry walked behind their grandmother’s casket.

A short service lasting about 20 minutes was held at Westminster Hall, led by the Archbishop of Canterbury, and accompanied by the Dean of Westminster.

The Queen will now lie in state in Westminster Hall for the next five days. Hundreds of thousands of her loyal subjects are expected to pass through Westminster Hall, paying their respects, leading up to the funeral on Monday, September 19. 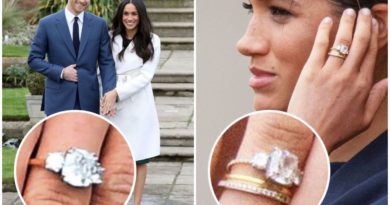 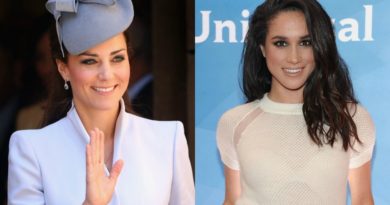 The Strict Wedding Rules All Members Of The Royal Family Must Follow, If Prince Harry and Meghan Markle Marry