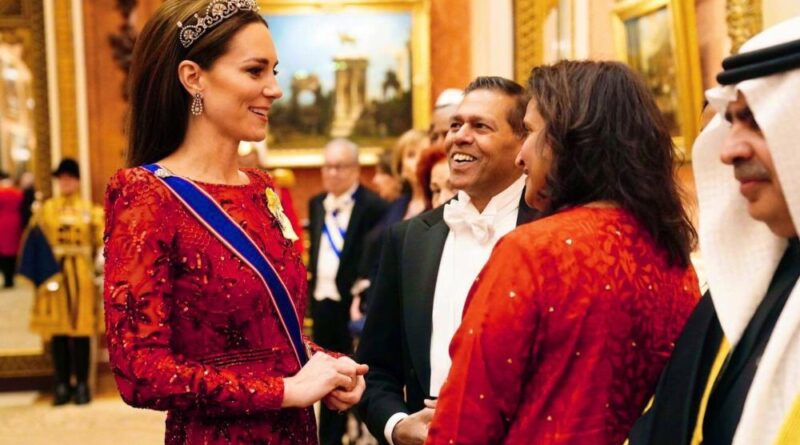 Prince William and Kate joined the King and Queen Consort at Buckingham Palace on Tuesday evening for the Diplomatic Reception.

Kate debuted another gorgeous look just a few days after she wowed the world on the red carpet at the Earthshot Prize Awards in Boston.

Kate accessorized her red Jenny Packham gown with the Lotus Flower tiara that she last wore in 2015 for the China state banquet. She wore the royal family order and the Dame Grand Cross of the Royal Victorian Order star and sash too.

The diamond and pearl tiara, also known as the Papyrus Tiara, was originally Princess Margaret’s go-to accessory. Before her husband, King George IV, ascended to the throne, the Queen Mother also frequently wore the tiara. According to The Court Jeweller, the Queen Mother used a necklace that was a wedding gift from her husband, the future King George VI, to make the Lotus Flower Tiara.

Tonight marks the second time Kate has worn a tiara as the Princess of Wales. She hadn’t worn a tiara since 2019 until she wore the Lover’s Knot tiara in November.

The diplomatic reception brings King Charles, Queen Consort Camilla, Prince William, and Kate together at an important time for The Firm. (Just yesterday, Netflix released a trailer for Harry and Meghan’s new documentary which Harry states that The Palace went so far as to fabricate lies about them in. Additionally, it discusses the massive media blitz Markle had after she wed Prince Harry).

Their Majesties met representatives of nations accredited to the Court of St. James at the reception tonight, which honors one of the largest diplomatic corps in the world.

A diplomatic reception was last held in December 2019, when it was hosted by Queen Elizabeth II. It did not take place in 2020 and 2021 due to the COVID-19 pandemic.