Harry and Meghan have already given their first baby a nickname who is expected to be born later this month or in early May.

The big reveal came during a post on the couple’s newly-launched Instagram account. In the latest post on their page, the couple they thanked fans for “making a real difference” by donating to charities in honour of their baby, who was referred to as Baby Sussex. “On behalf of the Duke and Duchess (and Baby Sussex), we thank you so much.”

Harry and Meghan are encouraging well-wishers to donate to their favorite charities instead of sending gifts.

They gave four suggestions on charities to donate to if fans were still looking to participate: The Lunchbox Fund; Little Village, WellChild and Baby2Baby. All of the organizations are focused on the well-being of children.

Harry and Meghan will welcome their first bundle of joy any day now. As the Duchess has already revealed, she is due to give birth the end of April or early May. Two weeks ago they moved out of Kensington Palace, where Harry lived as a bachelor, into Frogmore Cottage, in Windsor.

Last week the couple released a statement revealing they would not be giving live updates on their child’s arrival. They are keen for the arrival of their baby to be as private as possible. The statement reads: “Their Royal Highnesses have taken a personal decision to keep the plans around the arrival of their baby private.

“The Duke and Duchess look forward to sharing the exciting news with everyone once they have had an opportunity to celebrate privately as a new family.” 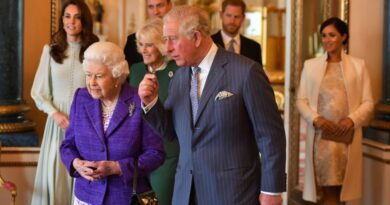 Harry, Charles And William Will Join The Queen To Talk Things Through