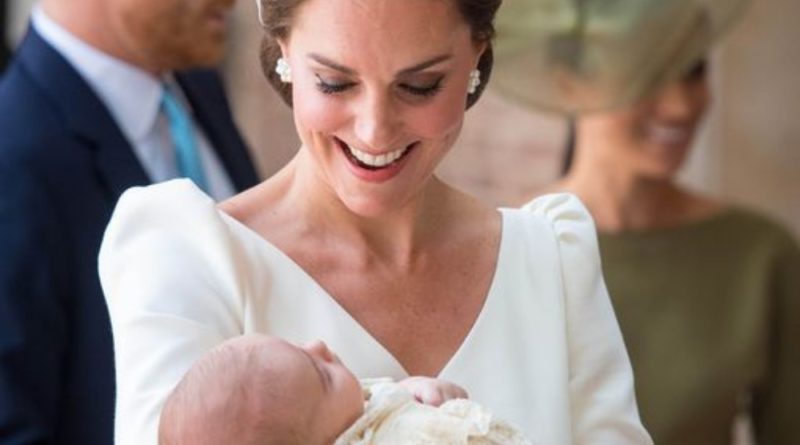 Members of the British Royal Family have arrived for baby Louis christening.

The Duchess of Cambridge arrived with sleeping Prince Louis in her arms for his christening on Monday afternoon.

Kate is wearing in Ralph Lauren and a hat by Stephen Jones. The little prince is wearing a handmade replica of the Royal Christening Robe, made by the Queen’s dressmaker, Angela Kelly.

The Cambridge’s depart and another wave from Princess Charlotte pic.twitter.com/lLNH5NcmEL

The Royal Christening Robe, of fine Honiton lace lined with white satin, was made in 1841 for the christening of Queen Victoria’s eldest daughter, Victoria, Princess Royal. George and Charlotte also wore the traditional christening gown.

Archbishop of Canterbury, the Most Reverend Justin Welby, will conduct the service. He also led the secret baptism service of Duchess in March.

Duchess Catherine was looking really proud. She was all smiles holding her youngest child as she made her way to the ceremony.

Kate had a small chat with the archbishop while holding Louis. She could be heard talking about little Louis. She describing him as “very relaxed and peaceful”.

“I hope he stays like this,” she added with a smile.

Members of the Royal Family arrive at St James's Palace for the christening of Prince Louis. pic.twitter.com/3pDk4D898C

A representative from Buckingham Palace told the BBC and Britain’s Press Association that their decision was made by the Queen in accordance with the Duke and Duchess of Cambridge “some time ago” and it was not because of ill health on either’s part.

Grandparents Carole and Michael Middleton, Kate’s brother James Middleton and sister Pippa were among the first at the chapel.