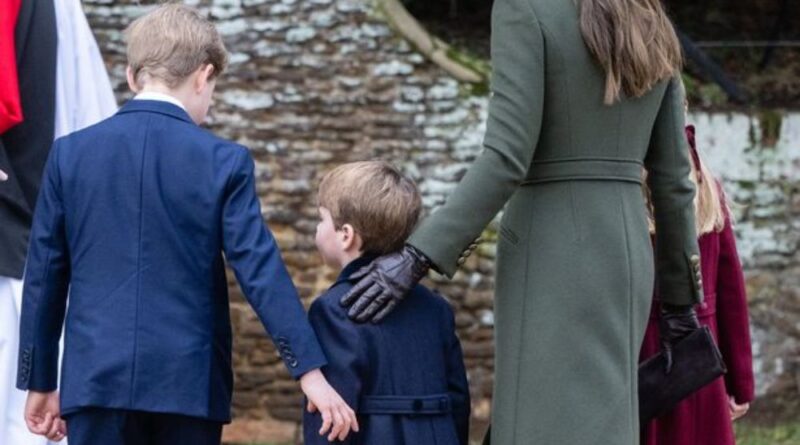 The family-of-five all joined the rest of the royals as they went to the traditional Christmas Walk.

As is tradition, Prince William and Princess Kate, accompanied by their three children, attended the Christmas walk Day service in Sandringham with the rest of the royal family.

However for one of them, this was a special occasion. Prince Louis, now four, joined his family at the Christmas church service for the first time this year. He was seen walking towards the festive service alongside his older brother, Prince George, who seemed to be lending a guiding hand to his siblings, and his sister Princess Charlotte.

The youngster looked as cute as ever in shorts and long socks, a familiar look for the royal family’s youngest, as he made his way to the event while clutching his mother’s hand.

This year was home of another first, as King Charles led the family to church for the first time, with him hosting this year’s Christmas at Sandringham following the death of the previous monarch, Queen Elizabeth, in September.

Charles was at the front of the line with his wife, Camilla, right beside him, while Prince William, Kate and their three children followed closely behind. Other royals that made an appearance at the service included the likes of Zara and Mike Tindall, Edward and Sophie Wessex with Lady Louise Windsor and James, Viscount Severn as well as Princess Beatrice, her husband EdoardoMapelliMozzi and his son Wolfie.

A bit of a shocking appearance was that of the disgraced Prince Andrew, who was seen alongside his youngest daughter Princess Eugenie and her husband Jack Brooksbank.

The royals were greeted outside the church by the Reverend Canon Dr Paul Rhys Williams before they entered the church and the National Anthem was sung before the first hymn, O Come, All Ye Faithful.

This marks a return to form for the royal family, as it will be the first royal Christmas at Sandringham since 2019.

In the past two years due to the Covid pandemic, the late Queen would spend the festive period at Windsor Castle, with the Duke of Edinburgh, unfortunately, keeping her company for only one of those years.

When the ceremony wraps up at St Mary Magdalene Church and the royals greet the gathered well-wishers, the family will return for the traditional Christmas feast, with every member gathered around a festive table.

Then they usually all sit down to watch the Queen’s televised address when it airs after lunch at 3pm on December 25th.

This year for the first time King Charles will be the one giving the address, and is expected to pay tribute to the late Queen.

An image of the King, taken during the recording of his inaugural festive address, has already been released ahead of official screening of the broadcast.

The photo shows the monarch standing while giving the address. In recent years the Queen would usually record the Christmas broadcast sat at a desk, however she has also stood on occasions throughout the many years of her reign.