Princess Charlotte has melted hearts at Trooping the Colour as she stepped out for the royal celebration with her parents William and Kate and siblings.

The four-year-old, who is due to graduate from nursery in a matter of weeks, was all smiles when she appeared on Buckingham Palace’s balcony.

Looking pretty in a floral dress, Charlotte matched her brothers, George and Louis, in white and blue outfits for the celebration.

However, there is one thing you may have missed about her.

First we saw Charlotte taking a peek out the palace window to catch a glimpse of the crowds with her brothers. In those photos she had her hair pulled back off her face with a blue bow on the top of her head.

But, later, when she stepped out on the balcony Charlotte had a completely different hairstyle.

It seems that the sweet Princess wasn’t quite happy with her hair! [LOL]

William and Kate’s princess had a middle parting and was sporting a pretty half-up ‘do, with the rest of her golden locks falling loosely down her back.

This was Princess Charlotte’s fourth appearance at Trooping The Colour. And she seemed thrilled as she watched the flypast, which included the famous Red Arrows.

While Prince Louis debuted his first royal wave, his sister has showed off her first royal double wave. The little Princess excitedly waved to the crowd with both hands during the iconic flypast.

It seems that the expertise on the royal wave runs in the family.

Members of the Royal family joined yesterday to celebrate the Queen’s official birthday on Saturday.

The Duchess of Sussex made her first appearance in public since giving birth to her son Archie four weeks ago. 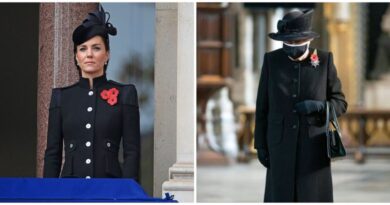 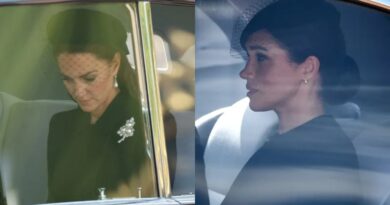