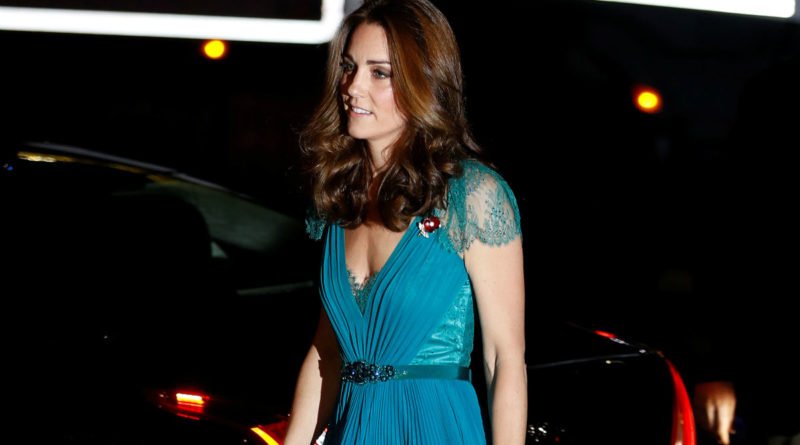 Kate is known for her unfailing elegance as she carries out her engagements. But, she was noticed several times with a rather less glamorous accessory.

The Duchess of Cambridge is often seen with a skin colored plaster on her elegant fingers. She was seen sporting one again when she and William attended the Tusk Conservation Awards in London this month.

For the occasion, she recycled one of her Jenny Packham’s gowns which royal watchers immediately recognized. But they were also drawn to the small plaster on her middle finger. Although Kate tried to hide it, eagle-eyed fans noticed it. Still, this is not the first time we have seen her sporting the band-aid.

Kate had been seen sporting a plaster on her right thumb during a visit to Keech Hospice Care in Luton on August 24. As she waved to the public we could have seen a plaster to cover up some injury or another on the thumb of her right hand. Then again in November 2016, on a visit to the Nelson Trust Women’s Centre, she was donning a plaster across the body of her left hand.

And again in December, the same year, Kate wore a tape on her left thumb as she guided her daughter Charlotte, away from the Englefield service on Sunday.

It is still unknown what has caused the injuries with some of the plasters spotted on the back of her hand and around her fingers. Buckingham Palace has never confirmed why her fingers are seen with plasters on them. When The Palace was asked about this they said: “We have no comment on the plaster,” reported The Mirror.

But let’s just assume that being a busy working mum, Kate accidentally runs up minor injuries on a regular basis. Well, just like every average mom of three.

READ NEXT: Why Do Kate And The Queen Wear Multiple Poppies On Remembrance Day?

These Are The Nicknames Duchess Meghan Had Throughout Her Life