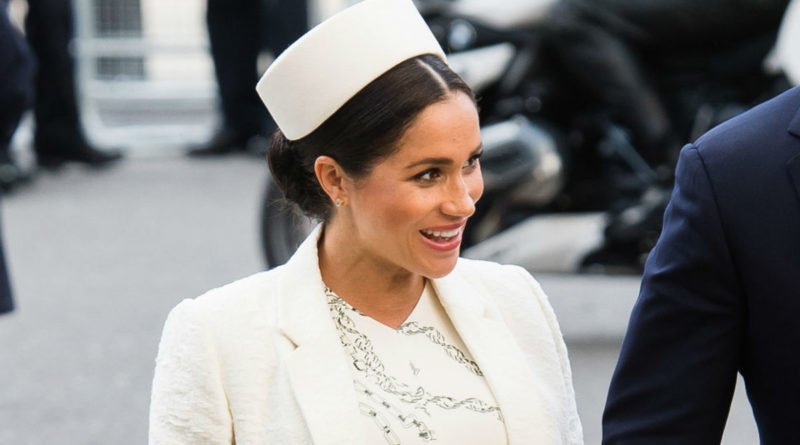 The Duchess of Sussex in entering the final stage of her pregnancy and it seems that she has started to show the usual symptoms that a women eight months pregnant should have. Despite that, the Duchess still managed to look picture-perfect on  Monday as she joined Prince Harry for two events to mark Commonwealth Day. One of the more noticeable symptoms is the fact that she is experiencing a bit of swelling, and because of that has decided to leave her engagement ring at home-sticking with her wedding room only. Swelling is a normal part of pregnancy that is caused by the additional blood and fluids which the body produces to meet the needs of the developing baby. Usually, the swelling, which is called edema, affects the hands, face, legs, ankles and feet.

Even with all those pregnancy-related issues, Meghan was still on top of her game as she and her husband Harry stepped out in London to attend all the event planned for the day. Their first engagement included a trip to Canada House in central London, a visit that has some significant meaning for the pregnant Duchess. There is no doubt that Meghan has lots of fond memories of Canada, as she lived in Toronto for six years during her run on the legal drama Suits. During their visit to the Canada house, they met with the diverse community of young Canadians living in London and around the UK. Harry is president of The Queen’s Commonwealth Trust and was just recently joined by Meghan who was named vice-president last week. Her Majesty remains a patron of the trust.

The couple joined the rest of the royal family later that in the day; to attend the annual Commonwealth Day Service at Westminster Abbey. It seems that future-mother enjoyed the service, especially when Alfie Boe sang a beautiful acapella version of Snow Patrol’s Run. Or maybe it’s just the pregnancy hormones. The Duke and Duchess of Sussex sat alongside the Duke of York, with Meghan looking as wonderful as ever in a  white coat, which was teamed with a black-and-white dress by Victoria Beckham, and pillar box hat. The royal family steps out every year to attend the service, but this year was special, as 2019 marks the 70th anniversary of the modern Commonwealth.

READ NEXT: How Meghan Sent A Message To Mom Doria In Erdem Coat Dress?

Royal Baby On The Way: Kate Arrived Back In London To Welcome Third Baby