It seems that the wait for the engagement between Prince Harry and Meghan Markle is not ending anytime soon as some reports indicate.

It has been thought, for quite some time that the announcement will come this November or at least before the end of the year.

Speculations are coming from everywhere, with everyone citing various events as a sign that the announcement is near. From their first public appearance to Markle’s interview with Vanity Fair, and her tea time dates with Harry’s grandmother, Queen Elizabeth.

Harry and Meghan basically never talk about their relationship but if you examine these photos with a trained eye you can figure out all the details https://t.co/leRmkrd5q5 pic.twitter.com/bpsBapORlF

There are also rumors that the actress has quit from her role in the legal drama Suits in preparation for her new life as a part of the royal family.

Despite this, it still seems the announcement is not coming anytime soon, and as The Daily Beast reports it might have something to do with the Duke and Duchess of Cambridge.

“There won’t be any announcement until at least after Kate has had her baby in April,” one source tells the website.

Actually, the insider also states, the couple might live together for a whole year before they actually they officialize it with an engagement.

It seems according to recent reports that the couple has started house hunting in England, Markle still hasn’t moved out from Toronto. The couple has been dating for more than a year at the moment.

“But there certainly is time, they have two whole months. The announcement might come”- you might say.

Maybe, but it’s highly unlikely that anything significant will happen from now until the end of the year.

“Harry … cares deeply about not upsetting his grandmother, and would be wary of appearing to seek to upstage the carefully planned royal Christmas schedule with an announcement anytime after late November,” writes The Daily Beast’s Tom Sykes.
If we remember correctly, Prince William and Kate Middleton dated several years before announcing their engagement in 2010, so it’s not something that hasn’t happened before.

Prince Harry, 33, had been dating the 36-year-old Markle for 6 months in secret before confirming the relationship in an official statement last November.

In it, he also condemned the “wave of abuse and harassment” that Markle had to endure as rumors started to circulate about their possible relationship.

It's obvious Prince Harry and Meghan Markle's are SO in love and it will make your heart melt ? pic.twitter.com/yjBtnGipQC

“Some of this has been very public – the smear on the front page of a national newspaper; the racial undertones of comment pieces; and the outright sexism and racism of social media trolls and web article comments,” the statement read.

It also brought to light the actions that have been also happening, such as an illegal entry in the 36-year-old home and harassment of her family.

Markle first acknowledged her relationships with Harry in an Interview with Vanity Fair, in which she stated that she was “in love” with Harry.

Fans of Prince Harry and Meghan Markle are going to LOVE this https://t.co/vTJUHTXJzA pic.twitter.com/Oyderwj2db

“I’m sure there will be a time when we will have to come forward and present ourselves and have stories to tell, but I hope what people will understand is that this is our time. This is for us,” she told the magazine.

“It’s part of what makes it so special, that it’s just ours. But we’re happy. Personally, I love a great love story.” 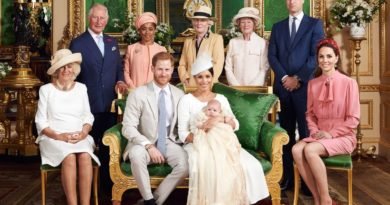