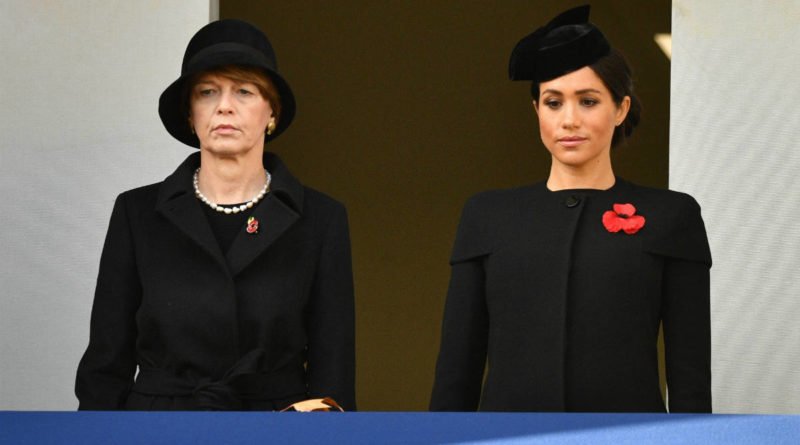 On Sunday the Royal Family attended the annual Remembrance Day service, which was lead by Prince Charles as he lay a wreath at the Cenotaph on behalf of the Queen. The ceremony was watched over by the Queen from a balcony, and she was joined by Prince Charles’ wife, the Duchess of Cornwall. In the past, Phillip would usually be the one to join the pair, but in his absence, the Duchess of Cambridge took his place alongside the two other royals.

The trio followed the ceremony from the Foreign and Commonwealth Office building, while the Duchess of Sussex stood on a different balcony from the trio, being joined by the German president’s wife Elke Büdenbender. Sophie Wessex, who was joined by Kate and Princess Alexandra last year, was placed next to Princess Anne’s husband Tim Laurence instead. Also in attendance were Prince Harry and Prince William, as well as Prince Andrew and Prince Edward. An equerry laid a wreath on behalf of the Duke of Edinburgh, who has retired from public duties. Other public figures also paid their respects, such as the other members of the royal family, government figures, including Theresa May and Jeremy Corbyn. For the first time, a German leader placed a wreath at the Cenotaph with President Frank-Walter Steinmeier performing the duty on behalf of his country.

On Saturday night, the Royal Family attended the Royal British Legion Festival of Remembrance at Royal Albert Hall. This was the first time the couple has attended the Festival of Remembrance together as a married couple, and this was their first public appearance with the royal family after Princess Eugenie and Jack Brooksbank’s wedding in October. During the evening, the Royals were treated with a tribute concert, with Sir Tom Jones, Sheridan Smith, Tom Fletcher and Danny Jones among those who performed. On Sunday evening the Royal Family will attend a special service at Westminster Abbey to mark the centenary of the Armistice.

Why We Won’t Be Seeing Kate And William Until September