William and Kate’s home is set to become the real-life set for an immersive theatre production for the first time.

The Queen, who was a close associate of Robert Walpole, helped strengthen the House of Hanover’s power in England. Lady Henrietta was best known for her wit.

The story will be told behind palace doors in the magnificent Georgian state apartments once home to both women, by Olivier award-nominated immersive theatre company Les Enfants Terribles.  It stretches across 14 different rooms in Kensington Palace.

James Seager, the creative director of Les Enfants Terribles, said: Caroline and Henrietta “refused to back down in a male dominated world, refused to be silenced and refused to bow to tradition. They changed the course of history re-defining the role of women at court, fundamentally changing palace life forever in the process.”

“Their stories deserve to be heard and told and we’re looking forward to introducing them to new audiences.”

Talking about the challenge of working in an iconic building, Fiona Porritt, creative producer at Les Enfants, revealed: “We usually build our own walls so we can drill holes for cabling and things but that won’t be happening,” she said.

“We’ve had to be creative and use theatrical elements such as lighting and music.”

Prince William and Kate live with their three children Prince George, Princess Charlotte and Prince Louis in a 20-room, four-storey mansion at the palace. Previously, it belonged to the Queen’s sister Princess Margaret.

United Queendom will run from February 28, 2020 to March 30, 2020. February tickets for the event have already sold out, while March tickets start at £35. Tickets available here.

READ NEXT: William And Kate Join Up With David Attenborough For New Exciting Project

Here’s Why William And Harry’s Children Have Different Surnames 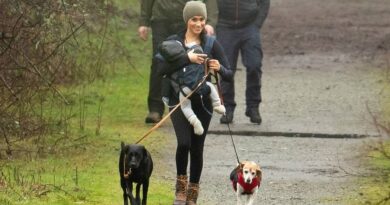