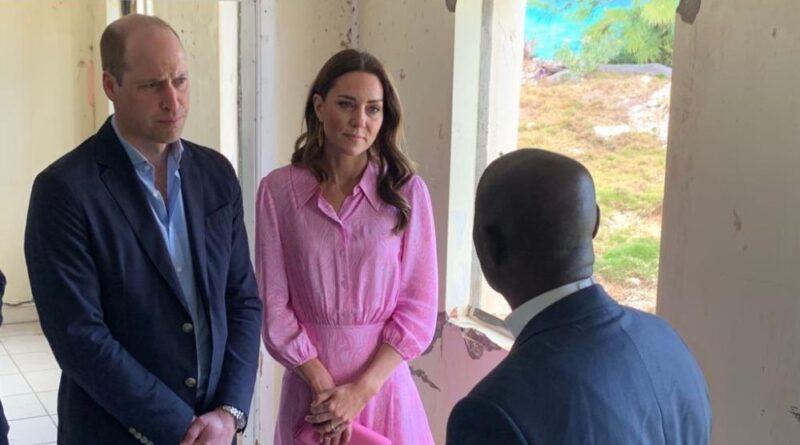 Prince William and Kate have kicked off the final day of the Caribbean Tour. The couple travelled to the Abaco Islands to learn about the impact of Hurricane Dorian on residents of the Bahamas.

Back in 2019, tragedy struck Abaco after Hurricane Dorian hit causing widespread destruction and loss of life. Queen Elizabeth wrote to the Governor-General to express her condolences following the hurricane.

For her final day of outings, Duchess Kate chose a bright pink shirt dress by the British brand RIXO. She combined it with a clutch bag by Emmy London and wedge heels by Spanish brand Castañer.

First, Prince William and Kate visited Daystar Evangelical Church to hear what it was like to be on the island at the point the hurricane hit, and how people have come together to support each other during an incredibly difficult time. The royals laid flowers at the memorial wall as they paid their respects to the victims.

Then, the couple joined a discussion with local residents to hear about how the community has pulled together since the hurricane.

Later in the day, Prince William and Kate will travel to Grand Bahama Island to meet with one of William’s Earth shot Prize winners, Coral Vita, and see their ground-breaking ideas for restoring and preserving reefs.

This comes after on Friday, Prince William and Kate were VIP guests at a reception hosted in their honour by the Bahamas’ Governor-General at the Baha Mar Hotel in Nassau. Just like throw out the whole tour, last night also Kate paid tribute to the country’s flag by wearing a shimmering turquoise bespoke silk duchess satin gown shoulder from British designer Phillipa Lepley.

Speaking at the event, William said: ‘Next year, I know you are all looking forward to celebrating fifty years of independence – your Golden Anniversary.

READ NEXT: The One Big Change To William And Kate’s Caribbean Tour Revealed