In the U.K. this year their Mother’s Day celebration is on the 14th of March, called “Mothering Sunday”. Children all over the country find ways to celebrate their mothers and show how much they love them, including our favourite royal children. And it seems that Prince George, Charlotte and Louis have outdone themselves this year, as Prince William and Kate Middleton shared a photo of a cake that their kids made for the holiday.

“Celebrating two other special mothers today ❤️ 🎂 made by George, Charlotte and Louis,” the caption read.

The photograph of the homemade cake was joined by another photograph, a throwback photo of Kate and her mother Carole Middleton.

Last year for the holiday the family did the same thing, sharing three previously unseen photographs on their official social media accounts. The pictures were of Princess Charlotte and Kate Middleton, with the little royal riding on her mom’s back, both of them all smiles. In the background, we can spot Prince George also enjoying a piggyback ride from Prince William.

Those photos are actually from three years ago, in the fall of 2018 when the whole Cambridge family gathered for their annual Christmas card photo at their country home in Norfolk, Anmer Hall.

That post also had three other photographs, one of Prince William and Prince Harry with their late mother Princess Diana, as well as an image of Kate with her mother. The last photo was from the sweet card made by Prince George for his mom.

The Cambridge only recently returned to London, after spending the entirety of the third lockdown at their country home, the family-of-five returned to their main home in London as their two eldest children, George and Charlotte, finally made their return to the classrooms.

On Thursday, the royal couple stepped out for one of their first in-person engagements in London in a while, visiting schools and talking to the teachers about the re-opening of the schools after the lockdown. During the outing, Prince William finally somewhat addressed the interview Prince Harry and Meghan had with Oprah and all the claims against the royal family that were made during it.

He simply replied with: “We are very much not a racist family,” as he was asked about the claims of racism in the royal family. When asked if he had spoken to Harry after the Oprah interview, he added, “No, I haven’t spoken to him yet, but I will do.” 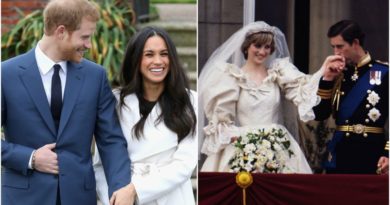