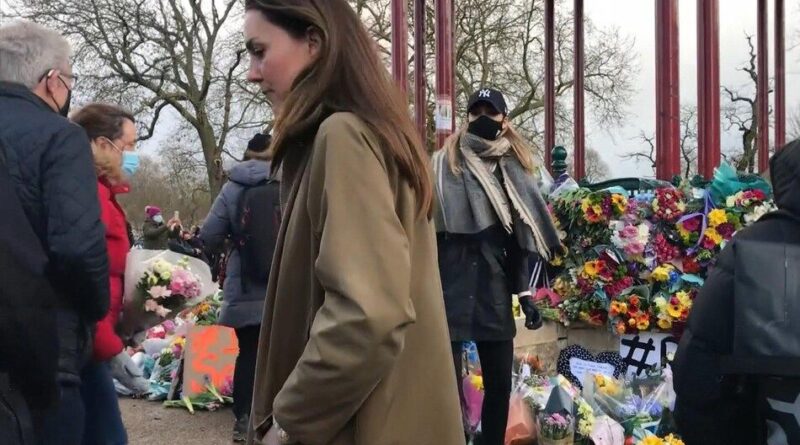 On Saturday, Duchess Kate made a surprise appearance at a memorial in honour of Sarah Everard.

Sarah Everard, a 33-year-old woman, was kidnapped and murdered, after walking back from a friend’s home in Clapham. Metropolitan Police officer Wayne Couzens, 48, was arrested on Tuesday. On Saturday, he appeared on court where he was charged with the crime.

To pay tribute to Everard, Kate stopped at a memorial at a bandstand in Clapham Common, south west London. She was seen laying daffodils picked from her garden at Kensington Palace she had tied together with a ribbon and walked alone across the common back to her car.

A royal source said: “The Duchess decided to make a private visit after being horrified by Sarah’s tragic murder.

“She remembers what it is like to walk alone as a young woman in London and elsewhere and like so many other women, has been thinking deeply about her experiences walking alone at night.

“It was important for her to make the visit and pay her personal respects to Sarah and to Sarah’s family.

“The Duchess remembers what it was like living in London and being a woman walking around the streets of the capital before she married William.

“She wanted to do it privately and felt it was the right thing to do.

“There was no fanfare, this was a private matter to her and she wanted to show unity with everyone else who is having the same feelings right now.”

Kate’s arrival comes after a formal vigil set to take place at the common, where Ms Everard crossed on her journey home on the night of 3 March, was cancelled by Reclaim These Streets after discussions with the Met Police.

In a statement, the Metropolitan Police said: “We take no joy in this event being cancelled, but it is the right thing to do given the real and present threat of Covid-19.”

Still, hundreds of people joined in the park in order to pay their respects.

READ NEXT: How Kate Sent Message Of Reconciliation To Meghan With Earrings